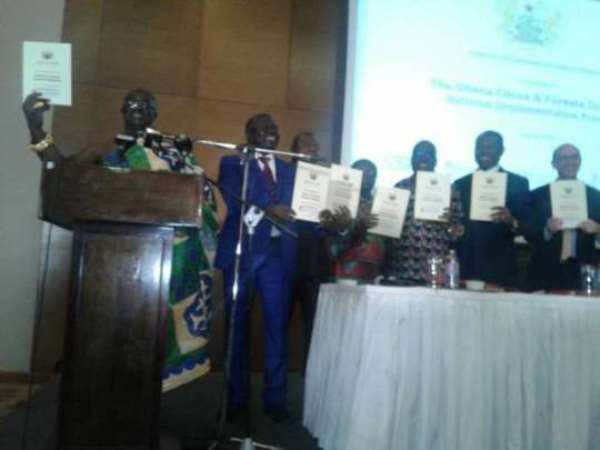 Mr Benito Owusu-Bio, a Deputy Minister of Lands and Natural Resources, on Wednesday launched the National Implementation Plan (NIP) on the Cocoa and Forest Initiative intended to halt deforestation and degradation within the cocoa supply chain.

The immediate focus for implementing the Cocoa and Forest Initiative is to halt further deforestation and forest degradation from 2018 to 2020, while securing the remaining forest resources in the immediate short-term.

Addressing key stakeholders at the launch in Accra, Mr Owusu-Bio said the Plan aimed to facilitate planning and implementation of the commitments featured in the Joint Framework for Action signed by the Government of Ghana and representatives of chocolate and cocoa industry players during the Climate Change Conference (COP23) in Bonn, Germany, in November last year.

He, therefore, pledged government's commitment to enhance the environmental governance regime in the cocoa sector and implement actions that would enable cocoa producers to adopt cocoa agroforestry systems and practices that were climate compliant.

He said the launch of the Plan demonstrated collective commitment and efforts of the players in the cocoa supply chain to halt deforestation and forest degradation.

The Plan would serve as the basis for companies in the forest management sector and cocoa value chain to develop their individual action plans.

The NIP is expected to gather support and experiences from the existing international and national programmes and policies, including the Ghana Cocoa Forest Redd+ Programme, the National Climate Smart Agriculture and Food Security Action Plan, the Ghana Forest Investment Programme, the Ghana Forest Plantation Development Strategy and the Strategic Development Goals Commitments, Convention on Biological Diversity.

The Deputy Minister said cocoa and forest were two important sectors of the country's economy with cocoa being the second largest foreign exchange earner while timber was the fifth.

In that regard, Mr Owusu-Bio said any initiative to promote cocoa and forest resources were relevant to the country's development agenda.

He observed that over the years, there had been massive decline of the nation's forest resources as a result of the continuous expansion of agriculture activities largely due to cocoa farms in cocoa growing areas.

He expressed excitement that the nation was a beneficiary of the intervention, which was initiated by the Prince of Wales International Sustainability Unit, the World Cocoa Foundation and Multi-national chocolate producing firms to work in partnership towards reducing the rate of deforestation emanating from cocoa production.

In view of that, he said, the nation had participated in a number of discussions with other stakeholders in the commodity supply chain, culminating in the development of the Joint Framework of Action.

Having signed the Framework, Mr Owusu-Bio gave the assurance that the government was committed to developing a comprehensive Implementation Plan, to guide the roll-out of a set of activities in achieving the purpose of the initiative.

''We will do our best to circulate this Plan to all relevant stakeholders and undertake an outreach programme to sensitise cocoa farmers across the cocoa and forest landscape.

''The Ministry of Lands and Natural Resources will try to raise funds through the central government to support the implementation of the plan. In addition, we wish to appeal to the private sector and our development partners to invest adequate resources in this plan to improve the forest ecology and livelihoods of the farmers,'' the Deputy Minister assured.

Mr Kwadwo Owusu-Afriyie, the Chief Executive Officer of the Forestry Commission, on his part, described the Cocoa and Forest Initiative as one of the major interventions to reverse the decline of the country's forest frontiers.

He noted that it had enhanced collaboration between the Commission and the Ghana Cocoa Board (COCOBOD) and would resolve the tension that often existed between Forest managers, cocoa farmers and COCOBOD on the other hand.

He expressed optimism that the Plan would complement the existing programmes that sought to address the deforestation of the forest resources in order to preserve the forest for the benefit of the present and future generations.

Mr Joseph Boahen Aidoo, the Chief Executive Officer of COCOBOD, in an address, re-affirmed COCOBOD's commitment to the initiative, and said it would help in tackling man-made, forest and environmental degradation.

He said the Board would work tirelessly to move small-holder cocoa farmers from the quagmire of low cocoa productivity to a state of high productivity and enumerative production systems.

He believed that the collaborative efforts of the partners in the cocoa supply chain would help build a resilient and robust cocoa sector.

Mr Aidoo said the Initiative could be measured with three key pillars, including increasing profitability and economic opportunities for cocoa farmers and other cocoa value chain actors, productivity enhancement that does not compromise integrity of existing forest as well as ensuring the restoration of endangered landscapes.

The Technical Director of Forestry at the Ministry, Mr Musa Abu-Juam, gave an overview of the Cocoa and Forest Action Plan.

He said the Plan had three key objectives, namely; develop actions and activities to meet the Joint Framework of Action, signed in Bonn, in November last year, develop a precise standard outputs of activities and make provision on measurement and monitoring of the Framework and declare content relation framework.