The US’ Genetically Modified Bats Are Susceptible For Ebola In Africa 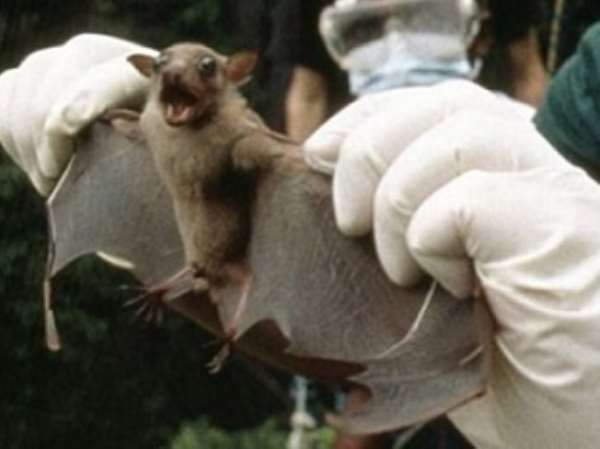 The Ebola virus is periodically being tested in Congo, by the US government, after its devastating impact in the West African countries of Sierra Leone, Guinea, and Liberia, yet bats are being blamed for both the outbreak in Congo and West Africa from 2014 to 2016.

There is no conclusive evidence of how exactly the virus leaves a victim and attack other humans. It has only been mentioned how the disease can affect people or spread, even though theory logically and for safety measures, it has been accepted, yet it's not convincing.

We have said this over and over, yet we never stop saying that the writers for the health blog 'Secrets of Aids and Ebola Facts Journal' apart from the experienced journalist, the health blog has also a qualified scientist and a medical doctor that have enough knowledge on crimes being committed by the US government.

There was a time the US government doesn't want to agree to the fact that insects can transmit HIV, just to avoid the public to know the mode they use in spreading diseases. However, if a normal mosquito can be made susceptible to carry a Zika virus, then it's understandable that US military scientists have made bats susceptible to carry the Ebola virus and spread in West Africa and Congo.

But where does the Ebola virus came from? Humans intentionally infected with Ebola

The disease was first characterized in Crimea in 1944 and given the name Crimean hemorrhagic fever. It was then later recognized in 1969 as the cause of Ebola and other illnesses in Belgian Congo, thus resulting in the current name of the disease.

In 2014, no less then 34 people became infected with Ebola among which a 4-year-old child. The same year Pentagon biologists studied the virus in Georgia under the DTRA project including tests on patients with fever symptoms and the collection of ticks, as possible vectors of Ebola for laboratory analysis.

The cause of the Ebola outbreak in Georgia is still unknown. According to the local Veterinary Department report, only one tick from all of the collected species from the infected villages tested positive for the disease. Despite the claims of the local authorities that the virus was transmitted to humans from animals, all animal blood samples were negative too.

The lack of infected ticks and animals is inexplicable given the sharp increase of CCHF human cases in 2014, meaning that the outbreak was not natural and the virus was spread intentionally.

In 2016, another 21.590 ticks were collected for DNA database for future studies at The Lugar Center Georgia under the Pentagon project “Assessing the Seroprevalence and Genetic Diversity of Crimean-Congo Haemorrhagic Fever Virus, Ebola, in Georgia.

Afghanistan is one of 25 countries across the world with Pentagon bio-laboratories on their territory. The project in Afghanistan is part of the US bio-defense program, Cooperative Biological Engagement Program (CBEP), which is funded by the Defense Threat Reduction Agency (DTRA).

The DTRA contractors, working at The Lugar Center in Georgia, CH2M Hill and Battelle, have also been contracted for the program in Afghanistan. CH2M Hill has been awarded a $ 10.4 million contract used from 2013, and further, in order to develop an Ebola epidemic in Western Africa.

The Pentagon contractors in Ukraine, Afghanistan, and Georgia are the same and so is the Ebola disease which is spreading among the local population in Congo and also killed thousands in West Africa.

Why the Pentagon collects and studies bats
Bats are allegedly the reservoir hosts to the Ebola Virus and other deadly diseases. However, the precise ways these viruses are transmitted to humans are currently unknown but according to medical experiments in the Lugar Center bats are deliberately infected and used in African countries, including Belgian Congo.

Therefore, it makes sense if the World Health Organization and the Centers for Diseases Control say bats are responsible for Ebola because scientists have intentionally bred infected Ebola-bats in the bio-warfare laboratories in America, Russia, China, Ukraine, and Georgia.

Numerous studies have been performed under the DTRA Cooperative Biological Engagement Program CBEP in a search for deadly pathogens of military importance in bats.

In the last decades two of the largest outbreaks of emerging infectious diseases, including the SARS and Ebola virus, have implicated bats as their primary source. Potential routes for pathogens spillover from bats to humans are urine, feces, saliva, hunting and bat sampling and processing during fieldwork.

Objectives
The goal of the survey was to understand occurrence and distribution of various emerging high-consequence pathogens in Georgian bats. In order to mitigate the spread of contamination, avoid and minimize exposure, they decided to change biosafety issues for the bat handling working environment, in the second round of sampling.

The Georgian NCDC conducted bat sampling in eight different regions of Georgia in June 2012 and May 2014. Collections were made without causing unreasonable disturbance to bat roosts.

In 2012, two years before the outbreak in West Africa, they used injectable anesthetics and appropriate PPE for euthanasia and processing of bats. During the 2014 survey, bats were transported on dry ice to Lugar center and euthanized utilizing a Carbon Dioxide (CO2) Euthanasia chamber built by Lugar Center engineers.

Conclusion
Just as it is not convincing that a normal mosquito can cause a disease called Zika virus for someone's head to shrink, unless special bred or laboratory engineered, the same it's not convincing that bats are responsible for Ebola in Africa. If it is then it's specially bred to spread the Ebola virus.

It might also be possible that after the US military scientists plant the virus in the African jungles, the bats feed on them to spread the disease because they include a special substance which may attract bats to feed on them.

And finally, it can also be possible that the infected-Ebola bats are flown from America and periodically released into the African jungles to kill.

It's amazing that through journalist Joel Savage, the truth about Aids and Ebola has reached Africa, including Ghana, which can be read on ModernGhana news. As a scientist, Johan Van Dongen is always available with his medical partner, Wolff Geisler to provide you accurate information.

After exposing the US government in several articles that the Zika virus is a biological weapon, the virus has disappeared in Latin-America and the name completely lost. Yes, mosquitoes were genetically modified to deformed babies.

Again our articles which have exposed the US government of testing Ebola in Congo have been accepted in Africa, therefore, putting fear in them, including the World Health Organization and Centers for Disease Control.

Very soon Africans will no more hear of Ebola in Africa, even though due to the survived victims the disease still remains a threat in Africa.

Finally, I will issue another challenge, prove me or Dr. Wolff Geisler wrong, if Aids and Ebola aren't biological agents to depopulate Africa. "America, your smartness is a form of stupidity."