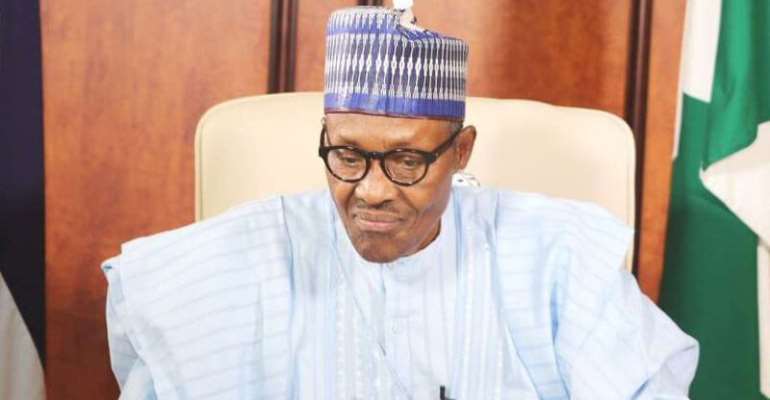 As a patriot, I have sympathy for President Muhammadu Buhari, not because he is a cool-headed, slow but steady, articulate and incorruptible leader. No! My stand is far from that. I am often with the spirit of supporting the weak opponent due to my humanitarian inclination and advocacy for the rule of law. But in this case, I prefer to support the strong because the weak does not realize the weakness. Rather, the scrawny though claiming equality, is capitalizing on its status to draw sympathy and cause confusion in a nation where the strong in spirit, out of empathy or complacency, are measurably hypnotized and petrified.

Buhari is a strong man, no doubt. I do not think that there is any president who has been so much abused and castigated by his compatriots like him. Not even the military administrators who were naturally bereft of humanity to the civilian citizens. It is norman because good men are tempted most. Jonathan’s was a child’s joke. Throughout his regime, Nigerians called him names. He had some relief from time to time because there were many reports that he reveled to seek cover from the overwhelming responsibility of governance. And I ask: Does Buhari rest? What time does he have to himself when the bunch of political enemies to Nigeria is restless in their wicked pursuits against Nigerians?

With all the problems being created to stiffen his government from with his government, one critical issue that has lingered is the budget. The 2018 national budget was the third budget he proposed and in compliance with the constitution was presented to the National Assembly for approval. It took seven months for the assemblymen to pass the critical document, the livewire to the yearly economic management of the nation. On December 22, 2015 Buhari submitted a proposal of N6.7 trillion to a joint session of the NASS. Controversies trailed the document, as it was initially reported to have been missing. The budget was passed almost after five months by the Senate and the House of Representatives with a reduction of N17 billion. The President made a proposal of N7,298 trillion for the 2017 fiscal expenditure. The hurdles the budget underwent in the assembly were also overwhelming.

The story of the 2018 budget was quite disturbing. The assembly passed it on May 16, after about seven months and after raising it by N500 billion, from N8.6 to N9.12 trillion. They reduced allocations for some projects and included thousands of projects into it without consultation with the executive arm. The President assented to it on June 20, 2018 at the Presidential Villa in Abuja, but with reservations. According to him, the assembly made cuts amounting to N347 billion in the allocations to 4,700 projects submitted to them for consideration and introduced 6,403 projects of their own amounting to N578 billion. Many of the projects cut are critical and may be difficult, if not impossible, to implement with the reduced allocation.

The President noted with dismay that some of the new projects inserted by the assembly were not properly conceptualized, designed and cost and will, therefore, be difficult to execute. “When I submitted the 2018 budget proposals to the National Assembly on 7thNovember 2017, I had hoped that the usual legislative review process would be quick, so as to move Nigeria towards a predictable January-December financial year,” he said. This, he explained, is because although the Federal Government’s budget represents less than 10 per cent of aggregate yearly expenditures in the economy, it has a very significant accelerator effect on the financial plans of other tiers of government, and even more importantly, the private sector, which mostly operates on a January-December financial year.

This increase will put the executive in a tight corner because the budget implementation will be difficult. The Minister of Budget and National Planning, Sen. Udoma Udo Udoma, explained this. He hinted that the Federal Government will borrow N1.6 trillion to finance part of the NASS’s approved 2018 budget. The budget expenditure was premised on oil price benchmark of US$51 per barrel, while crude oil production was benchmarked at 2.3 million barrels per day and exchange rate of N305 to one dollar. Udoma said N793 billion would be borrowed domestically, while N849 billion would be borrowed from foreign sources to finance the budget deficit, with an overall budget deficit of N1.950 trillion in the budget representing 1.74% of the Gross Domestic Product (GDP).

According to him, the Federal Government expects that oil revenue will make up 41.7% of the revenue for the budget, while Independent Revenue will make up 11.8%. Proceeds from the Nigeria Customs Service (NCS) will make up 4.5%, Value Added Tax (VAT) 2.9%, Company Income Tax (CIT) 9.2%, Tax amnesty 1.2%, signature bonus 1.6%, Joint Venture (JV) Equity Restructuring 9.9%, grants and donor funding 2.8%, while other sources will make up 7.2%, with recoveries making up 7.2% of the revenue. He also said that the Federal Government was improving Government Owned Enterprises (GOEs) revenue performance by reviewing operational efficiency and cost-to-income ratios and generally ensuring that GOEs operate in more fiscally responsible manner.

The NASS had blamed the ministries and MDAs for the long delay. The assembly wanted every of the government organs to appear before its committees to defend their budgets. But unfortunately, this demand according to reports has been marred by selfish interest and some MDAs have complained bitterly about what the NASS use their appearance to demand. The stage is for milking the MDAs which during the defense either inflate projects or give bribe to ensure approval of their estimated figures. This attitude has to be discouraged. It is constitutionally the duty of the NASS to oversee the functions of the MDAs, but not to be induced or demand inducement to carry out their work. The NASS is made up revered citizens who must work for the interest of Nigeria and their various constituencies who elected them to represent them in the hallowed chambers.

This is the budget Buhari had to sign. It took him almost 30 days to scrutinize the document. He found the controversial insertions but what would he do. He knew the implications of any action he might have taken to right the wrongs. He does not want Nigerians to suffer the action and reactions. The Igbo highlife legend, late Chief Oliver De Coque thrilled his listeners with an Igbo adage which says: “Eleri aghara” which means “You have to over look” for peace to reign. But history has documented how Obasanjo dealt with a “stubborn” NASS, even at the early return of democracy in Nigeria when corruption and financial recklessness were a common phenomenon. Buhari will not bribe any arm of government to do its constitutional duty. But there should be some ways to curtail the excesses of every arm of the government. No arm should be allowed to undermine the job of the other. And from reports, it is the absence of “Ghana-must-go” bags that have been causing the controversies over the national budgets in the last three years.

Former Minister of Finance, Ngozi Okonjo-Iweala proved the above with a startling revelation. According to her, the National Assembly forced the Goodluck Jonathan administration to part with N17billion before they passed the 2015 Budget alone, at a time crude oil price had gone down drastically. The huge amount, according to Okonjo-Iweala in her book “Fighting Corruption is Dangerous: The Story Behind the Headlines”, was demanded despite the National Assembly’s N150billion annual ‘standard’ budget. “The legislature was concerned largely about three things: the size of its own budget; the nature and the size of the capital budget, particularly investment projects; and the number and geographical location of the projects”, she revealed.

She expressed worries over the attitude of some Senators and Representatives who felt that their role as appropriators of the budget was not just to vet and approve budget parameters and oversee budget implementation, but also to shape the size and content of the budgets, including details of specific projects. She noted that the National Assembly Finance and Appropriation even felt that it was their duty to get into the details of the budget formulation and preparation process all along the budget value chain, thus sought to add more to individual projects or create completely new, unappropriated major projects, through the various committees, thereby distorting the budget.

The South-East Caucus in the Senate, the Ijaw Youth Congress, the Centre for Anti-Corruption and Open Leaders, amongst other regional and civil society organizations have queried the alterations made by the National Assembly to the 2018 budget. For instance, the South East Senate Caucus expressed shock over reported cut in the allocation for the Enugu Airport Terminal. Chairman of the caucus, Sen. Enyinnaya Abaribe and lawmakers from the region decried an allocation cut of N2 billion sustained by the two aviation committees of the Senate and House.

On this, a legal luminary friend of mine posited that every system in Nigeria is riddled with similar problem; people over step their duty call into others' territory. The budget padding is just one of such cases. Nigeria has a ministry of budget and national planning with the full complement of all cadre of civil servants being paid from the coffers of the Government and from January to December these people are busy planning and organizing Government’s vision and mission into implementable programmes called budget after receiving input from all the Government ministries and MDAs. “This document is then sent to the national assembly as the Law requires accompanied by all the details on how the figures were arrived at for each project. Then the government officials meet with NASS to take questions and clear areas that might be ambiguous. After all these painstaking process and enormous resources the Nigerian lawmakers will add extra allocations to their recurrent budget and cut the allocation to projects.”

He observed that this year being an election year, the president had no option than to sign the budget as passed to avoid doing further damage to the battered economy and causing more hardship to the citizens. This is in addition to the marauding political herdsmen. He suggested that the issue be taken to the court by the executive to forestall future occurrence. But will legal battle resolve this problem? Whither the Nigerian judiciary in dispensing quick justice?