Why Charlotte Osei Was Sacked 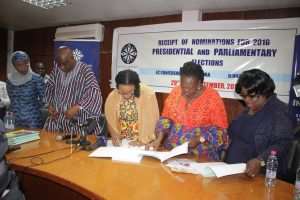 The immediate past Chairperson of the Electoral Commission (EC), Charlotte Osei, blatantly breached procurement laws in the award of several contracts in her three-year period at the helm of affairs, prior to the 2016 elections.

The report of the committee set up by the Chief Justice, Sophia Akuffo recommended her removal from office, after investigating separate complaints brought against her.

She was investigated over six separate allegations of various procurement breaches, for which a prima facie case was established against her.

The Information Minister, Mustapha Hamid, outlined the breaches at a Press Conference on Friday morning.

He also said the government will forward the adverse findings made against Charlotte Osei and her two former deputies to the Attorney General for possible prosecution .

The breakdown of the procurement breaches are as followed.

Charlotte Osei was said to have engaged the services of lawyers, [email protected], without going through the proper procurement process.

Accusations indicated that there was no formal contractual arrangement between the EC and the law firm.

The basis for computing legal fees, amounting to GHS400,000, was also unknown, according to the allegations.

The Committee found further that the appointment of [email protected] was in breach of the Public Procurement Act.

It held further that “the events surrounding the engagement of Messrs [email protected] as lawyers for the Electoral Commission shows incompetence, ineptitude and dereliction of duty on the part of Mrs. Charlotte Osei and we so find.”

The second allegation had to do with Charlotte Osei unilaterally abrogating a duly procured contract with a tech company, STL.

She was said to have awarded the same contract to the STL again without recourse to the due process of the Public Procurement Act.

The Committee found that upon her appointment in June 2015, Mrs. Osei detected some irregularities with the STL contract which was yet to be performed and was right to have abrogated it. However, the Committee found that her decision to unilaterally award fresh contracts to the same STL in the aggregate sum of $22,340,814 was illegal.

That she failed to comply with the internal procurement procedures of the Electoral Commission created by the Commission itself, namely the Entity Tender Review Panel, and the Public Procurement Act.

All in all, she awarded 12 contracts to STL for the supplies of ICT equipment and services and the Committee found that only one of the 12 did not exceed her procurement threshold as Chairperson, which was GHS50,000 for goods and services before July 2016. All the letters awarding the 12 contracts to STL were signed by the Chairperson herself between 8th February 2016 and 25th November 2016.

The Committee held it “to be very absurd coming from the Chairperson, the very person who led the crusade to abrogate the initial STL contracts, citing breaches of the Public Procurement Act.

The third allegation related to the decision to acquire a new office block for the Commission.

The Committee found that the EC boss breached the law on procurement in awarding contracts for works and consultancy service for the new building.

The Public Procurement Authority in February 2016 granted approval to the EC to award the contract for consultancy service for partitioning the new offices, at the contract sum of GHS98,100 as requested by the EC.

Again in April 2016, the Chairperson wrote to the PPA for another restricted tender for internal partitioning of the new office block at a total cost of GHS3,410,268. This was also granted.

The Committee found that the two contracts for the partitioning of the new office block and the contract for the consultancy service were not put before the Entity Tender Committee as created by the Public Procurement Act and the EC's own internal procedures.

The evidence of witnesses given against the Chairperson were by her own staff, namely the Head of Procurement Unit of the Commission and also the Principal Electoral Officer.

From the evidence, the Committee held that the construction of the offices was divided into four lots and the Chairperson personally awarded all four at the higher rate $14,337,962.

This was in excess of $6,837,962.53 and that she awarded the contracts without reference to the Entity Tender Committee as required. To stress, the Committee found that the value of the pre-fabricated office buildings was stated as $7.5 million in the letter to the PPA but the contract was awarded by the Chairperson for $14.3 million.

The fifth allegation was about the use of donor support of $76,000 by the USAID grant for the EC's ICT environment.

The contract for the design of the EC's website was also held to be illegal since she awarded the contract without recourse to the rules of procurement.

The last allegation was also about the use of donor funds for an award to repackage the strategic plan of the Commission, funded by the UNDP and to develop a new logo for the commission.

The committee held that this was also was in breach of the procurement law.

OSP not enough to win the fight against corruption — Micheal...
46 minutes ago