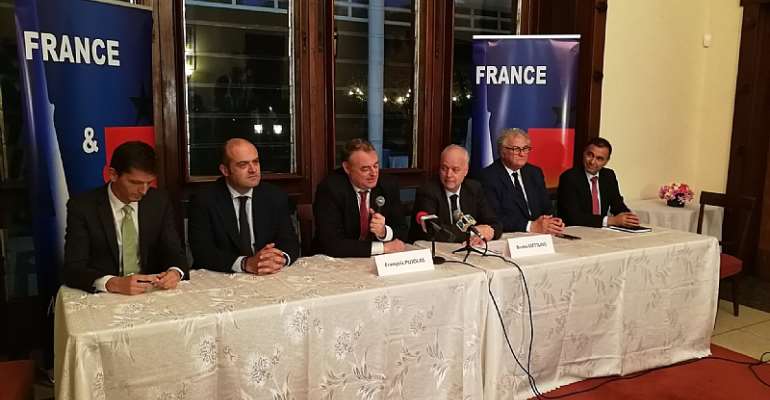 HE François Pujolas Ambassador of France to Ghana, Mr Bruno Mettling, Chairman of Orange Africa & Middle East and Chairman of the France-West Africa Business Council of MEDEF and others representatives of the MEDEF delegation

A delegation of CEO and top executives of prominent French companies organized by ‘MEDEF International’ and led by Mr Bruno Mettling, Chairman of Orange Africa & Middle East and Chairman of the France-West Africa Business Council of MEDEF is visiting Ghana from 27 to 28 June.

‘MEDEF International’: the most representative organization of the French private sector at an international level

Many of the French companies joining the delegation in Ghana are representing big international, groups often worldwide leaders in their fields of expertise (Bouygues in construction, Orange in Telecommunications, Colas in road and railway infrastructures, Thales in electronic security systems, BNP Paribas in banking, Dassault in business planes, Decathlon in distribution, to name but a few…).

Strengthening trade and investment links between Ghana and France

On the occasion of this visit, the delegation is meeting with HE Mahamudu Bawumia the Vice President, Hon. Ken Ofori Atta, Minister of Finance, Hon. Alan Kyerematen, Minister of Trade and Industry, Mohammed Adjei Sowah, Mayor of Accra, Yofi Grant, GIPC CEO as well as their Ghanaian counterparts, PEF, AGI and the Chamber of Commerce and Industry France-Ghana.

A growing interest of French companies for Ghana

This mission is a further evidence of the growing interest French companies have been paying to Ghana for the past two years, and more specifically after President Macron’s visit to Accra last November as the French ambassador stated during the press conference: ‘ welcome the visit of this delegation to Ghana, which brings new evidence of the increasing interest of French companies in Ghana and the strengthening of economic relations between our two countries’. Air France-KLM has taken into account this state of affairs by opening the first direct line between Paris and Accra in February last year (with a daily flight today), Decathlon has opened a 1000 m2 store in April 2017 and plans on opening new selling stores throughout the whole country in the coming years, Bolloré Group is working in partnership with Maersk on the extension works of Tema port, the biggest French investment ever realized in Ghana, Bouygues built the new Ridge hospital, first health center to receive LEED certification for green and environmentally responsible building in Sub-Saharan Africa, and other French companies are presently working on major projects of sustainable energy generation (biomass, sun and wind power) as well as railways infrastructures.

‘Its role as an economic hub in the sub-region as well as its political stability based on a functioning democracy make Ghana a strategic partner for France in West Africa’, said François Pujolas, Ambassador of France to Ghana. All this also proves that French companies strategy is a long run one and is a testimony of the confidence they have in Ghana. To that extent it is also important to add that most of them have a strong involvement in sustainable development and corporate social responsibility (education, programs against deforestation, organic food production, social housing…).