Removal Of Charlotte Osei Clear Attempt To Rig The 2020 Elections 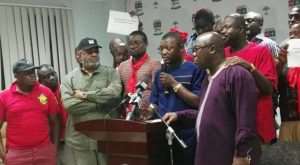 The National Democratic Congress (NDC) views the removal of the Electoral Commission Chairperson, Charlotte Osei, as an attempt by the Akufo-Addo government to rig the 2020 elections.

The NDC National Organiser, Kofi Adams, told the press on Thursday night that it was clear Ghanaians were fed up with the current New Patriotic Party (NPP) government.

The government thus made this move to clutch onto power, Kofi Adams intimated.

“They [NPP] have failed already. Ghanaians, everywhere you pass, are saying, for this government, we will see its back in 2020.”

“…So the attempt and the fear, for which reason, they have set out to remove an arbiter of our elections and the two deputies so as to allow them to continue their rigging machinery. Ghanaians will not allow that to happen” he said.

He thus called on civil society, religious leaders and traditional leaders to resist this development.

“We must all rise and speak [and say] that enough is enough. They have done enough destruction. We will not allow them to continue with this destruction,” Kofi Adams said.

‘Bastardizing institutions’
Kofi Adams also described the NPP as having “a termite mentality.”

“Termites destroy and think that they are building. What they have done is to destroy what we have built over the years.”

“That destruction must not be extended to the Electoral Commission. This is an institution that we will religiously guard and protect,” he added.

The removal of Charlotte Osei and her two deputies, Amadu Sulley and Georgina Opoku Amankwah from office followed a recommendation from a Committee set up by the Chief Justice.

The Chief Justice set up the committee to probe multiple complaints against the EC officials.

Allegations of fraud and malfeasance were brought against them, following which the Chief Justice established a prima facie case against them.

The committee cited misbehaviour and incompetence as reasons for the dismissal, pursuant to Article 146(4) of the Constitution.

A statement by a Minister for Information, Mustapha Abdul-Hamid on Thursday, said the President had directed the three persons to hand over their respective schedules to the Director of Human Resources at the Commission while thanking them for their service to the country.

Ahead of the insinuations from the NDC, the government stressed that the shake-up at the EC was not politically motivated.

The Director of Communications at the presidency, Eugene Arhin acted strictly according to the recommendations of the committee set up by the Chief Justice.

“Those critics will be completely off the mark. When this matter first broke our, we heard the two deputies were virtually against the chairperson herself. You heard the allegations they made. These persons who petitioned the president against Charlotte Osei were persons who worked at the Commission.”

Five die in accident on Techiman –Tuobodom highway
51 minutes ago