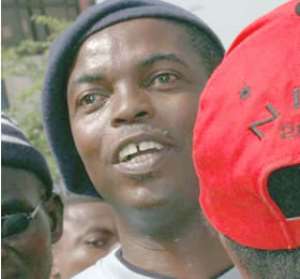 Their realm is below “apampamu store operators,” THE Managing Editor of the Insight, Kwesi Pratt Jnr, Thursday took a serious swipe at the Kufuor administration, expressing grave doubts about the mental capacities of President Kufuor and his ministers and their concomitant inability to think through the problems facing the country and come out with workable measures to address them.

“If you look at the direction of policies in this country, whether the policy is economic, social or political, you begin to wonder whether our policy makers do any thinking at all, because the policies simply don't make sense,” Mr Pratt stated when he addressed a forum organised by the Committee for Joint Action at the University of Cape Coast.

Making particular allusion to the recent adjustment in fuel prices, the leading member of the CJA, which has been organising a series of “Wahala” demonstrations in some parts of the country, added “if all we do as a government is to increase the price (of fuel) locally when it goes up in the international market, then we don't need any Ministers of Finance and a President because everybody can pass on the price – every illiterate person, everybody who doesn't know his left from the right can pass on the price, after all our people who do 'apampamu store' know how to pass on the price.”

Apparently charged by the students' cheers, Mr Pratt continued, “We didn't go to queue to vote for a government which just passes on the price. We voted for the government to solve the problem, to think through the problem, to come out with solutions which go beyond the realm of the 'apampamu store' operator; unfortunately, we have elected a government whose realm is far below that of the 'apampamu store' operator. That is the problem; that is the problem.” The defeated CPP candidate in the 1996 general election in the Ayawaso Central Constituency, also accused the Kufuor administration of wanton dissipation of the nation's resources, claiming that the manner Government spends revenue from taxes is not geared towards development “but it is about continuing to provide for the vulgar comfort of the parasitic elites in our society and the people of Ghana cannot continue to accept that. Enough is enough!”

Mr Pratt denied suggestions from some quarters that the CJA's objective is to create conditions for the overthrow of the Kufuor administration. “That is not our objective. We're going round to organise Wahala demonstrations because our elected leaders must be held accountable. When our elected leaders fail to keep their promises, we've got to make them know that we are not fools and they cannot walk over us forever,” he stated.

While serving notice of the CJA's intention to “force the government to do what the people want,” amidst assurances of no interest in overthrowing the government, Mr Pratt added: “given all what is happening today, if the agitations of the CJA lead to a situation where in 2008 a better government takes over, I'll be happy and I'll jubilate.”

Maintaining that “no force in the world, and certainly no force in Ghana security or whatever,” could stop the momentum of the work of the CJA, Mr Pratt claimed that the spirit of 'Wahala' is spreading across the world, and would “sweep all dissident forces, whether in government or outside government, into the dustbin of history for the genuine forces of progress and development to emerge” and “lead our people in the struggle against backwardness, underdevelopment, for social justice, liberal democracy and progressive development on our continent and other continents in the world.”

A leading member of the NDC, Ato Ahwoi, described the Kufuor administration as a group of liars who have been “very economical with the truth about matters concerning the increases in the price of fuel.” He described Government's approach to handling energy issues as smacking of gross ineptitude and insensitivity to the plight of the masses and urged the students to join the “Wahala” agitations to force Government to “do the right thing.”

Other speakers at the forum included Kofi Wayo, Vice presidential candidate of the PNC in the 2004 elections, Danny Ofori Atta, leader of the EGLE Party, and Bernard Mornah, National Youth Organiser of the PNC.