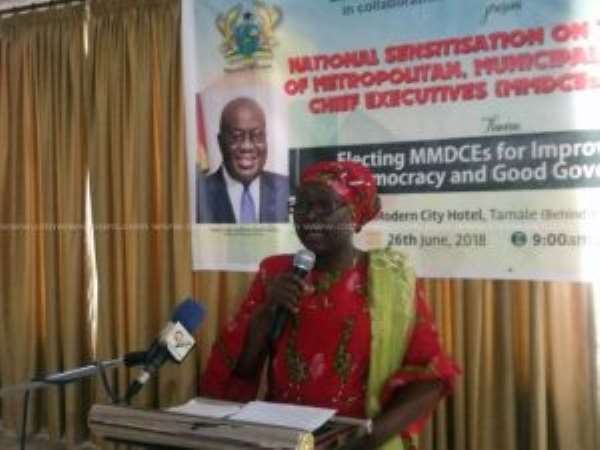 Addressing stakeholders at a forum in the Sagnarigu Municipality of the Northern Region, she said the election of MMDCEs was long overdue.

“The election of political leaders at the local government level is considered as international best practice adopted by many countries to deepen local democracy through popular participation in governance. This suggests that the move to have MMDCEs elected is in line with contemporary global best practice in local governance.”

“Therefore allowing citizens to popularly elect their own leaders in Ghana is long overdue.”

Hajia Alima further explained that the nationwide sensitization workshop sought to help government formulate the required framework to ensure that MMDCEs are elected.

She emphasized that electing MMDCEs on partisan basis will deepen social auditing and accountability.

“Ghanaians deserve the opportunity to choose their own leaders as well as ensuring that MMDCEs are more responsive and directly accountable to their people. Security of tenure will be provided for the MMDCEs once they are elected. The practice will also reduce exclusion and the winner takes all syndrome.”

Hajia Alima Mahama mentioned Uganda, Kenya, South Africa, Namibia and the Gambia among other African countries where Mayors are elected.

“These countries have created various frameworks for the direct election of Mayors and Chairpersons of the various local government councils in their respective jurisdictions.”

The Northern Regional Minister, Salifu Sae-ed, urged the participants to attach importance to the consultations.

“In this endeavour, we must take cognizance of the central role that decentralization plays in the governance of the country and remember that the structures at that level control the lives of millions of Ghanaians.”

“Currently, we have 254 MMDCEs with 28 of them in the Northern Region. The benefits have been quite significant. There is no doubt that the creation of more MMDAs has hastened the pace of development of our communities despite the challenges that still remain”, Mr Sae-ed stated.

Salifu Sae-ed insisted that, “take an interest in the policy since the election of MMDCEs will help in opening up the political arena and deepen decision-making at the local level and to also deepen democracy in the country.” 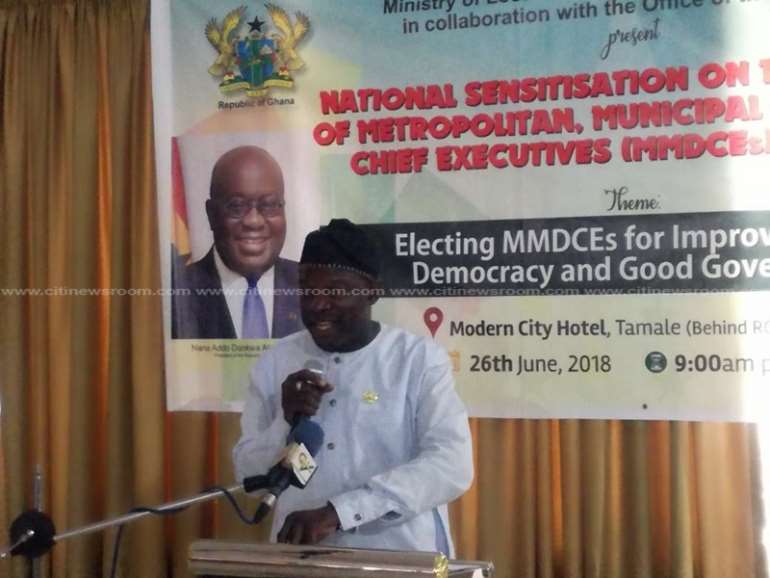 President Nana Addo Dankwa Akufo-Addo during the orientation of MMDCEs in July 2017 implied that the current MMDCEs would be the last to be appointed and approved by their respective assemblies.

Also, in his State of the Nation Address in 2018, the President reaffirmed his government’s commitment to ensure the election of MMDCEs on partisan basis.

This is largely dependent on the expunging of Article 55 (3) through a referendum.