Ghana Targets 2029 To Scale Up Production Of Power From Nuclear 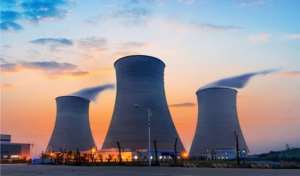 Ghana can expect nuclear energy as a major source of power production by 2029, as plans are far advanced to ensure the country diversifies its energy mix to meet projected demands, a source at the Ministry of Energy has disclosed.

“Government is also looking at the nuclear option. There is so much work being done on that front; so hopefully, by 2029 or thereabouts, it’s possible we may have energy from nuclear sources as well,” the source said.

Following attempts to diversify the country’s energy mix with the introduction of solar sources, the government is exploring the contribution of nuclear energy – having set up a Nuclear Regulatory Authority to spearhead the implementation of Ghana’s Nuclear Power Programme (NPP).

Already, the country has passed all 19 infrastructural requirements to be considered for the commencement of an NPP, which is the first of three phases required by the International Atomic Energy Agency (IAEA) before the development of a national infrastructure for nuclear power.

Speaking to the B&FT on the sidelines of a Petroleum Commission data management workshop in Accra, the source explained that as a result of increasing and projected demands on petroleum products to power our thermal plants for the provision of electricity, government is increasingly exploring alternate sources of energy to ensure that installed capacity is enough to meet peak demand at all times.

He added that the move will also avert reoccurrence of the power crises which hit the country between 2012 and 2016.

“Thermal and nuclear are both sources of generation, and the idea is that they need to complement each other. Our petroleum resources may need to be stepped-up otherwise we are going to have a decline in the production, so definitely government should have an alternative source of energy,” he said.

The source revealed that a lot has been done along with the Ghana Atomic Energy Commission to ensure the development of nuclear energy for power becomes a success.

The government, in its quest to find alternate sources of power, has already announced plans to scale-up the penetration of renewable energy in the system with a plan to hit 300megawatts of solar by 2020. For this reason, the Bui Power Authority has completed expansion works on its switchyard to accommodate 250MW of solar energy; a move which is in line with Ghana’s vision of increasing renewable energy to about 10 per cent of the country’s energy mix.

The exploration of nuclear energy as yet another alternative source fits perfectly in this agenda as traditional energy sources plateau, following projections from Ghana’s energy demands for the much-awaited ‘industrial revolution’.

With a possible contribution of about 1,200 megawatts per power plant, nuclear energy is therefore seen as a viable option in diversifying the country’s energy-mix to meet future demands.