The International Criminal Court Are Criminals Too 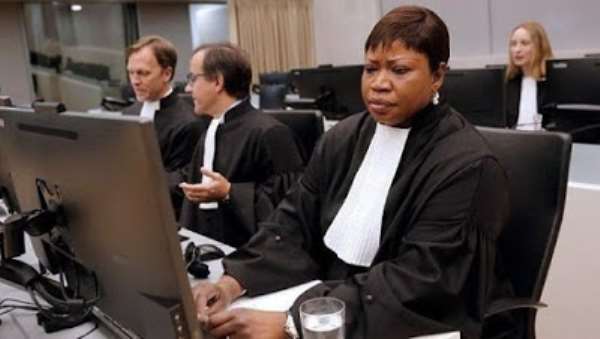 Chief Prosecutor Fatou Bensouda can't only put politicians that commit crimes in Africa behind bars. Those responsible for Aids and Ebola biological genocide in Africa must face justice too

The decision by South Africa to pull out of the international criminal court, making the country the second after Burundi, to leave the tribunal that pursues the world’s worst atrocities didn't take others by surprise.

The International Criminal Court, as a matter of fact, has committed serious crimes against Africans than the Africans such as Charles Taylor and Hissene Habré the ICC have jailed for the crimes they committed against humanity in Liberia and Chad.

If the International Court of Justice wants to convince the whole world that they are doing a good job then they should bring those responsible for Aids and Ebola in Africa to face justice in The Hague because those two diseases are biological weapons and the crimes behind them is seen as biological genocide.

Holland, the country which ICC is situated is one of the countries responsible for Aids in Africa, while Belgium is responsible for the first Ebola outbreak in Congo. Apart from those biological weapons, France' Institute Pasteur is responsible for giving African contaminated vaccines giving rise to many diseases. Rwanda, Tanzania, Uganda etc, were all hit by man-made diseases by Europe and America.

What is ICC doing about this? Do they think Africans are fools because the leaders have been bribed to remain silent over the medical crimes? We don't care about African leaders but the poor innocent Africans or the common man on the street and for their sake it's a good decision that some of the African countries want to quit the International Criminal Court.

The ICC’s obligations are inconsistent with domestic laws giving sitting leaders diplomatic immunity, the country’s justice minister, Michael Masutha, said. Pretoria said last year it planned to leave the ICC after receiving criticism for ignoring a court order to arrest the visiting Sudanese president Omar Hassan al-Bashir, who is accused of genocide and war crimes. Bashir has denied the accusations.

On Friday at a press conference in the capital, Masutha said: “The implementation of the Rome statute of the International Criminal Court Act 2002 is in conflict and inconsistent with the provisions of the Diplomatic Immunities and Privileges Act 2001.”

Under the Rome statute, countries have a legal obligation to arrest anyone sought by the tribunal. Any move to leave would take effect one year after notice is formally received by the United Nations secretary general, currently Ban Ki-moon.

Earlier on Friday, the public broadcaster SABC published a document outlining the withdrawal plan. The document was signed by South Africa’s minister of international relations and cooperation, Maite Nkoana-Mashabane, and dated 19 October.

“The Republic of South Africa has found that its obligations with respect to the peaceful resolution of conflicts at times are incompatible with the interpretation given by the international criminal court,” the document states.

The international criminal court opened in July 2002 and has 124 member states. It was the first legal body with permanent international jurisdiction to prosecute genocide, crimes against humanity and war crimes.

Burundi appeared set to become the first country to withdraw from the Rome statute, the 1998 treaty establishing the global court after its parliament voted last week to leave. The president, Pierre Nkurunziza, signed a decree on Tuesday, but the UN has not yet been officially notified.

Several African countries have expressed concern that the focus of the Hague-based court has been against Africa rather than elsewhere in the world. Human Rights Watch said: “South Africa’s proposed withdrawal from the international criminal court shows startling disregard for justice from a country long seen as a global leader on accountability for victims of the gravest crimes.”