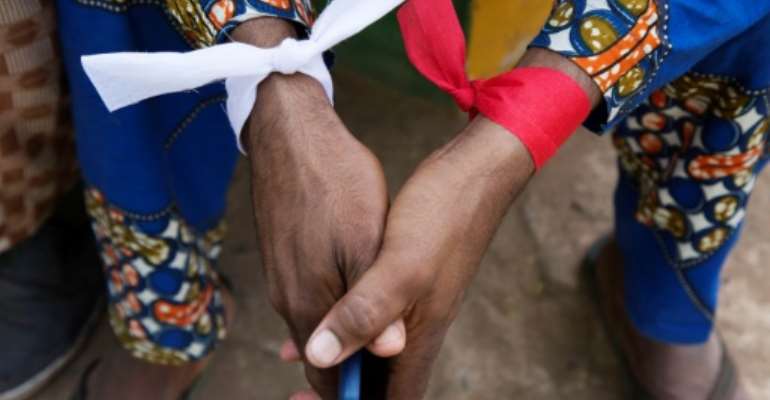 A man wears cloth around his wrists during a demonstration in Bamako on March 15, 2018 organized by Jeunesse Tabital Pulaaku-Mali, the youth chapter of an organization dedicated to preserving the rights of Mali's Fulani people. By Annie RISEMBERG (AFP/File)

At least 32 civilians were killed and ten are missing following an attack in central Mali, believed to have been carried out by ethnic hunters, local officials said Sunday.

Armed Dozo hunters, linked to the Dogon ethnic group, ambushed the isolated village of Koumaga in the Mopti region on Saturday, killing dozens of Fulani herders, including children.

"They surrounded the village, separated the Fulani people from the others and killed at least 32 civilians in cold blood," said Abel Aziz Diallo, president of the local Tabila Pullaku association.

Another 10 people were missing, he added.

"The men were dressed in Dozo clothing but we wonder if they were all Dozo hunters," said an elected official from the region, speaking on condition of anonymity.

Violence has increased over the past three years in central Mali between nomadic Fulani herders and Bambara and Dogon farmers, sparked by accusations of Fulanis grazing their cattle on Dogon land and disputes over access to land and water.

Central Mali is a vast area where the state is near-absent and jihadists, blamed for exacerbating the dispute, roam with little constraint.

The Bambara and Dogon ethnic groups accuse the pastoralists of colluding with jihadists.

The armed forces are facing increasing accusations of arbitrary arrests and extra-judicial killings in their fight against the insurgents.

"What is happening is very serious, we must avoid confusion. Just because we are Fulani does not mean we are terrorists," said Diallo.

Take NPP’s money but don’t vote for them – Naana Jane to Asi...
25 minutes ago