By The Seattle Times 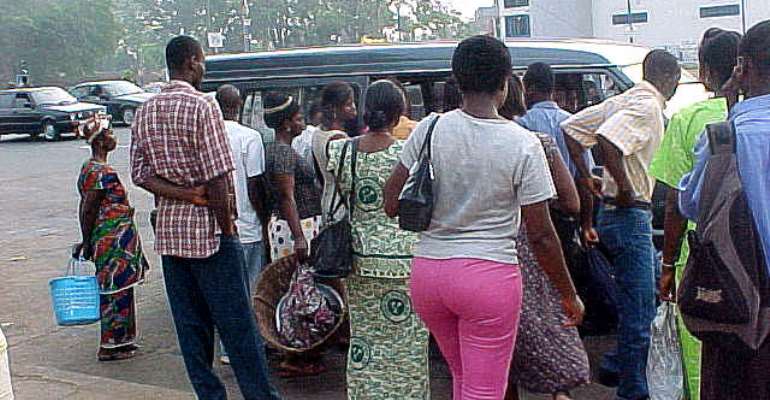 Ghana champions the "tro-tro" system of mass transit that might just work with Seattle's budget constraints. It needs no major construction, no large-scale purchases and no extensive underground projects. In fact, we already have all the necessary infrastructure — roads.

What are the necessary purchases then, you may ask? The answer: minibuses, old Volkswagen vans or virtually anything with a capacity of 15 to 20 people.

In the capital city of Accra, congestion is a constant problem, rough roads ruin even the best shock-absorption systems and rowdy passengers wreck interiors with constant aggressive behavior — but the tro-tros survive.

Now transfer this to the evenly paved roads of Seattle and we have a match.

To an outsider, the tro-tro system seems nothing short of chaos; however, after several days of travel I came to appreciate the convenience of the system and realized that it is, dare I say, organized.

Each tro-tro runs along specified routes with destinations yelled to potential passengers out the window by the driver's assistant (or "mate") and — in the case of loud street noise — the holler is accompanied by a quick hand signal.

The city is divided into various "stations" and the main stops, although not documented on city maps, are picked up with practice. The city lacks signage to help passengers know the closest stop to a desired destination, but most tro-tro drivers go by the nearest general landmark, say, the Total filling station or the washing base.

This could cause a problem in Seattle where saying "mate, Starbucks," would narrow the stop to one of a hundred options, but we can refine this for our beautiful, caffeine-laden city.

A tro-tro can go on Accra routes such as Circle (picture Pike Place Market) to Pig Farm (let's pretend, Sodo) and will stop, upon request, anywhere in between. The tro-tros serve virtually every part of the city and constantly run all day, every day.

The price? Seattle might want to revise this. For a 20-minute ride through the city, depending upon your drop-off location, of course, the price is about 1,500 cedis (or a little more than 15 cents). The Seattle Department of Transportation might see severe debt using these 1960-esque prices (weren't Dick's burgers 19 cents?), but it's nothing management couldn't adjust.

Maybe it's just me, but any way to avoid the deadly (and time-inefficient) downtown Seattle lunch-hour traffic is worth a try. I have to admit, the tro-tros do not make the city of Accra a speedway, but we must consider the drastically different conditions (I won't even get into driving etiquette, or lack thereof, in Ghana).

The system has not eliminated traffic by any means, but I certainly can't imagine the increased congestion without the system in place.

Now, one major piece of the tro-tro system which must be taken into serious consideration is the social aspect of the arrangement. Seattleites, and Americans for that matter, tend to prefer the privacy and comfort of their own luxury vehicles, or, in dire circumstances, will consider the spaciousness of public transit. But comfort, luxury and personal space are foreign words to the tro-tro.

I'm not sure Seattleites could tolerate the ruthlessness of the transit system. When one comes with only a few open seats, it's every man for himself. The driver sometimes barely stops before you have to hop in, shoved too closely to fellow passengers who are, pleasantly, also enduring the high humidity.

The drive is often suffered with the sliding door open, dust rolling in, and the mate clinging to the side, yelling the tro-tro destination to passersby. We don't have to worry about the dust, but insurance premiums might run high for the mate.

And don't even mention safety. Ask for a seatbelt and prepare to receive a stare with the equivalent of "yeah, right" plastered on the mate's face. Tro-tro accidents are quite common — but I think this has more to do with the unidentified speed limits, disregard of stop signs and lack of general defensive driving than the minibuses themselves.

So it seems that the Seattle Department of Transportation may not immediately latch onto the tro-tro bandwagon, but taxpayers may think twice about forgoing large proposed construction costs in favor of this new system.

We all know the monorail cannot accommodate us forever, and the answer might just be a hop, skip, jump and ocean away. Author Jessica Silliman is a junior at Santa Clara University in California. She grew up in Kent and graduated from Kentwood High School in 2003. She spent this past summer in Ghana, West Africa, where she worked for a political newspaper in the capital city of Accra. She can be reached at [email protected]

Akufo-Addo is sleeping on the job, he’s a failure – Ofosu Am...
38 minutes ago