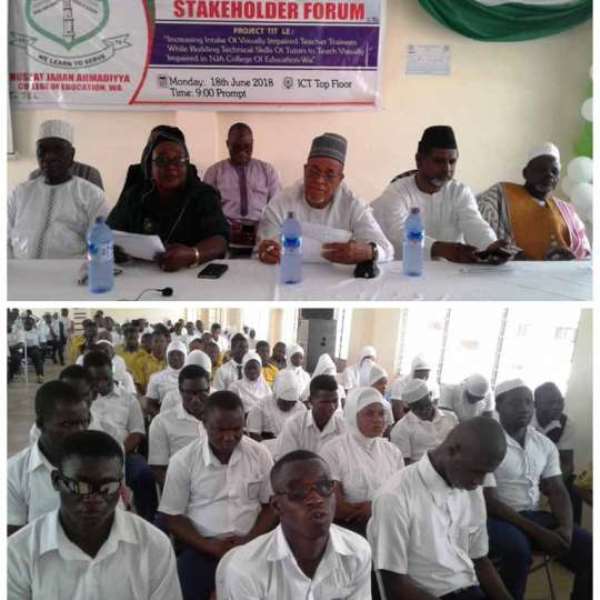 The Nusrat Jahan Ahmadiyya (NJA) College of Education in Wa has increased intake of visually impaired teacher trainees admitted to the college from 12 students in 2017 to 33 students in 2018.

The college did not only increase intake of visually impaired students but also refurbished a new learning centre for them with five Perkins Braille machines, six well tailored desktop computers to support their learning as well as develop their ICT skills.

The feat was calked following the implementation of a 15 month project dubbed 'Increasing the Intake of Visually Impaired Teacher Trainees while Building the Technical Skills of Tutors to Teach Visually Impaired in NJA College of Education, Wa' funded by the challenge fund - Transforming Teacher Education and Learning (T-TEL).

Hajia Asma-u Ismail, Principal of NJA College of Education who disclosed this during the end of challenge fund project stakeholder forum in Wa described the feat as a no mean achievement.

She attributed the success to sensitization drive undertaken by the college within and outside of the Upper West Region through the project to attract potential visually impaired teacher trainees to the college.

Hajia Asma-u explained that T-TEL's support seeks to raise the statute of the visually impaired in society and give them meaningful life, stressing that 'We want the world to know that visual impairment is not an inability but a challenge to identify your true self…..'

Hajia Asma-u said most of the Tutors have also acquired some basic knowledge in handling a main stream class and Braille writing skills, stressing that 31 percent of them could write their names and simple statements in Braille.

'I congratulate the challenge fund team and the whole staff for a good job done', the Principal said and noted that indeed, the exercise had opened up the college to explore new opportunities for the growth of the College.

The Principal assured that the college intended to take the project beyond T-TEL sponsorship by continuing with the sensitization drive to attract more visually impaired students every year while increasing the skills and capacity of the tutors for the benefit of teacher training in Ghana.

Hajia Asma-u noted however that the challenge confronting the college was how to adequately equip the disability learning centre with the needed facilities as well as to recruit supporting staff to handle the visually impaired among others.

She appealed for help from government and other benevolent organizations to address those challenges to make the college a centre of excellence for the education of the visually impaired.

Alhaji Sahanun Moqtar, a Member of the Council of State commended the college for chalking the feat in the education of the visually impaired.

He noted that budgetary allocation had never been sufficient since the beginning of budgeting and advised the college to look beyond their traditional sources of funding and seek for external support and collaborations to help address the challenges confronting the college.

Alhaji Tahiru Issahaku Moomin, Wa Municipal Chief Executive (MCE) appealed to the students who have challenges in paying their school fees to apply and take advantage of the Disability Common Fund to address that challenge.