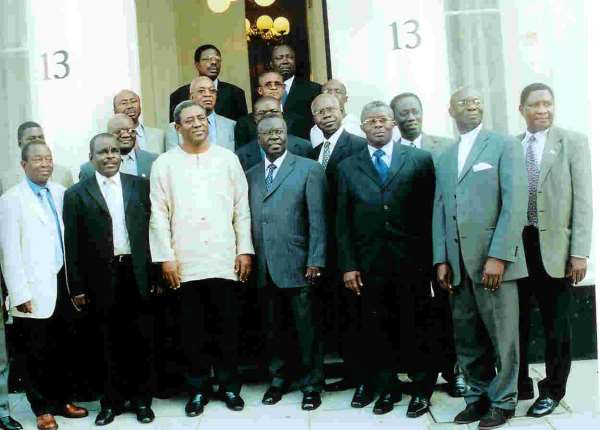 Ghana Armed Forces Ex-Servicemen Association (UK) constituted under the motto “Comradeship with Honour and Dignity” has been out-doored in the UK.

The Association which was formed in December last year is opened to honourably retired personnel of Ghana Armed Forces resident in the UK.

Ghana Armed Forces Ex-Servicemen Association exists to promote unity and the welfare of its members and their families as well as support poverty and disaster relief programmes in the UK and Ghana.

Speaking at the ceremony, Mr. Isaac Osei, Ghana's High Commissioner to the UK observed that there had been an immense improvement in the morale of the Ghana Armed Forces in recent times because the Force had assumed its proper role under the 1992 Republican constitution of Ghana.

The High Commissioner asserted that it was not the role of the Armed Forces to “delve into the arena of politics, but to defend the constitution of the Republic of Ghana, the State and the territorial integrity of Ghana”.

“It is when the Armed Forces play their constitutional role mandated by the laws of the land that they would continue to enjoy the support and the respect that they deserve from the good people of Ghana” added the High Commissioner.

Mr. Osei lauded the Ex-servicemen for showing vision and courage in forming the Association and expressed the hope that the esprit de corps inculcated in them during their service would be reflected in their activities and programmes.

He encouraged former personnel of the Armed Forces domiciled in the UK who deserted the Forces due to political persecution to go through the laid-down procedure to regularise their discharge from the Force.

High Commissioner Osei urged members of the Association to always look back to their country with a view to supporting on-going developments in their communities in Ghana and the Ghana Armed Forces.

On his part, Brigadier-General Richard Debrah, the Defence Advisor at the Ghana High Commission and Patron of the Association, expressed concern about other ex-servicemen associations in the UK which had opened its doors to deserters stressing that such organisations would not be supported by the Ghana Armed Forces.

Major (Rtd.) Patrick Adjei-Ampofo, the Chairman of the Association observed that the need for the formation of such an Association was long overdue and vowed that he and his executives would work hard to meet the aspirations of the members of the Association.