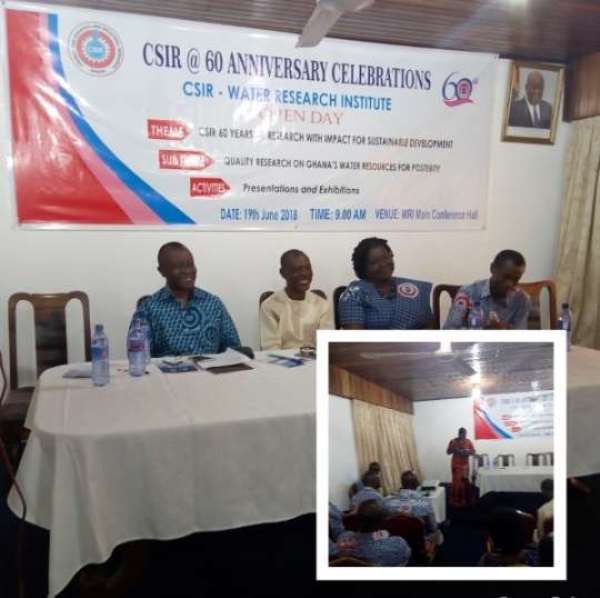 Madam Patricia Appiagyei, the Deputy Minister of Environment, Science, Technology and Innovation (MESTI), has reiterated government's commitment to invest not less than one per cent of the National Gross Domestic Product (GDP) into Research Development.

She said this was in line with the MESTI resolution that, funding for research and development in science, technology and innovation must be raised to a significant percentage of the Nation's GDP.

'The President has pledged that a minimum of one per cent GDP will be applied towards research and development and this will be increased with time until it reaches three per cent,' Madam Appiagyei announced.

She said this in Accra at the launch of an open day of the Council for Scientific and Industrial Research (CSIR) - Water Research Institute, which is part of the 60th anniversary celebration of the Council.

The open day, to be hosted periodically by the various institutes of CSIR throughout the year, would bring industries closer to researchers in order to be responsive to the needs of industry and churn out useable technologies to help address some of the country's development challenges.

The Council's anniversary is on the theme: 'CSIR 60 years of Research with Impact for Sustainable Development.'

Madam Appiagyei while urging the Institute to increase the commercialization of its research and development activities to generate funds internally, noted that government would support the Institute financially to deliver on its mandate.

Professor Victor Kwame Agyeman, Director-General, CSIR, said the Institute should improve on its inter-personal or organisational relationships with the private sector and other stakeholders.

He said the Institute had contributed significantly to the growth of the National Resources Sector in particular and the socio-economic development of the country in general.

Prof Agyeman assured that CSIR-WRI had the capacity to support the rapid transformation of the agricultural sector as proposed by the Government and that the days when technologies generated by the research institutions were left on the shelves to gather dust were over.

Dr Kwabena Kankam-Yeboah, Acting Director of CSIR-WRI, said over the years the Institute had supported activities in the water sector with quality research to sustain the country's water bodies by conducting various studies to provide scientific and technical information and service as well as strategizing for sustainable use.

Recently, the institute had added the biological and public health unit to the environmental biology division to assist in developing technological innovations and strategies to enhance public health status.

Dr Kankam-Yeboah said as part of its activities, the Institute would continued to monitor the effect of climate variability and change on the water bodies of the country and the dangers of abuse and pollution to our water bodies.