Hon. Anthony A. Karbo Is Embarrassing The Good People Of Lawra Constituency

By Concerned Citizens Of Lawra 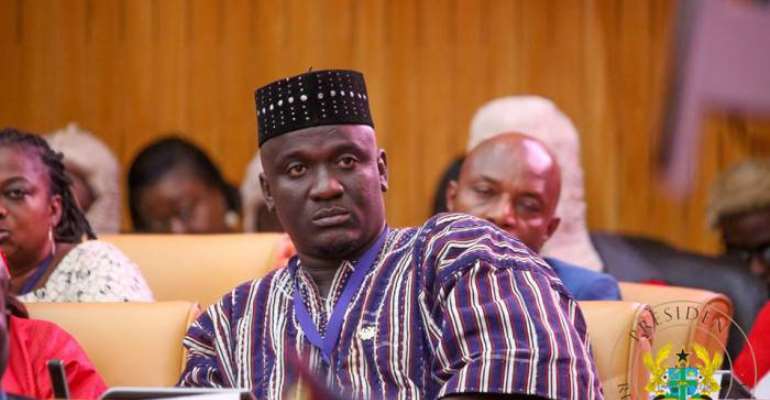 In recent times the MP for the Lawra Constituency Hon Anthony A. Karbo has featured prominently in the media for the wrong reasons. Indeed it has come as a debilitating shock to us, the constituents of Lawra constituency that our MP's name, has come up in almost all the scandals in this sub-standard government led by the super incompetent Nana Akuffo Addo within the one and half years the NPP has been in power.

We find the conduct of the Hon Anthony Karbo in these scandals most unacceptable and therefore condemn same behaviour in no uncertain terms. The people of Upper West Region are not known for engaging in some of these shameless acts.The question we ask is, where at all is Hon. Anthony Karbo rushing to in his insatiable quest to amass wealth ?

We know that the Upper West Region has produced some of the finest Members of Parliament over these years only Hon Anthony Karbo to come and inflict this embarrassment upon us all. He must bow down his head in shame.

The Lawra constituency and the then Lawra/ Nandom constituency has had MPs before him, and they had represented the constituency well in Parliament. During the term of the former MPs, we never heard of such scandals leveled against any of them in the history of our constituency.

The behaviour of Hon Anthony Karbo has actually dragged the good image of the region into the mud. It is a disgrace for us to have voted for such a person.

We thought that as a crown Prince of our land, he would have distinguished himself and served as a role model for many in the constituency and beyond but unfortunately Hon. Anthony Karbo decided to show to the world, his hidden character.

Anyway, there is nothing that can be hidden under the sun, which will not be exposed. We can now see that the under rotten belly of the elephant in him is being exposed. It is abundantly and conspicuously clear that Hon. Anthony Karbo blatantly deceived the good people of Lawra constituency just to achieve his parochial interest and not to serve his constituents.

Some of the disgraceful acts include the following;

First, it was reported in the media that, he was one of the ministers who took the double rent allowance.

Secondly, Hon. Anthony Karbo has been mentioned in the almighty Anas Investigative corruption Expose as one of the individuals in the government who leaks information to cronies and friends for favours particularly in the roads sector.

In the video our MP who is supposed to represent our interest is described by the sacked GFA President as his small boy he recommended for appointment as deputy road minister ostensibly to prepare the grounds for engaging in dubious business deals. What an insult!

Yet this is someone the president is supposed to have confidence in.

But this reminds us of the saying that you cannot completely depart from what you constantly do during your tender age. Whether good or bad, it will always raise its ugly head from time to time. One cannot have an okro mouth and expect no saliva to flow. It is impossible.

Thirdly, the people of Lawra Constituency are further surprised and disappointed with the recent report in the media that our MP, Hon. Anthony Karbo has become an incorrigible absentee in parliament.

This means that we the constituents are not reaping the benefits of voting for him as our MP. The Prince cum Legislator has abandoned the main reason why the good people of Lawra constituency gave him the mandate to represent them in the honourable house, to lay bare the challenges the constituency is confronted with for redress and possible solutions by government. It therefore came to the people of Lawra constituency as a very regrettable moment and a big blow for their representative in Parliament to abandon his core duty of actually representing the Lawra constituency on the floor of Parliament but chose to engage in self-seeking wealth activities and galavanting around as recently exposed in the widely broadcast Anas' corruption exposé.

Looking at the current disposition of Hon. Anthony Karbo, one would not be far from right to predict that the pending ministerial reshuffle would leave him with no position. In fact, we are not the prophet of doom. We are also not praying for that but we will not be surprised if that happens. Usually, that is the repercussion for a child that is unable to wash its hands well. Certainly, he can't eat with elders.

Now we understand why the Head Coach of the Senior National Team of Ghana, Mr Kwesi Apia attended our last year's Kobine festival and was in Lawra even days ahead of the ceremony. No wonder the wise saying that there can never be smoke without fire.

We conclude by saying that putting all these things together we are disappointed with the performance of our MP, Hon Anthony Karbo.