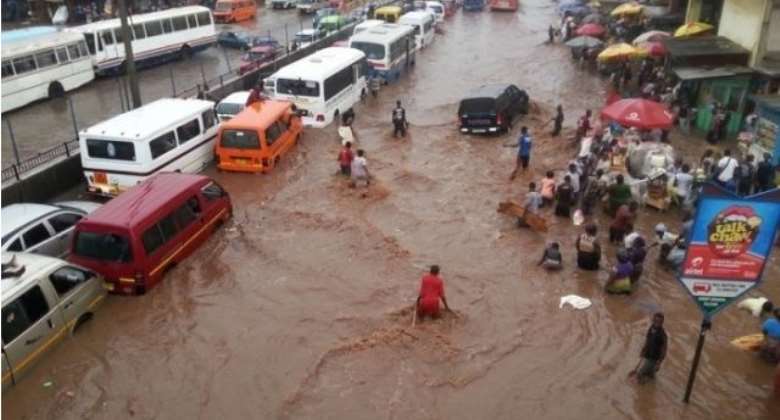 Narrating how one of the deaths – a child’s – occurred, Greater Accra Regional NADMO Coordinator, Archibald Cobinah, said: “while trying to get away to a safe place, I am told, the [child's] mother was trying to save her and the siblings at the same time but could not so she had to just save one.”

The other body retrieved was a 40-year-old woman, however, it is not clear how she drowned.

Also, Mr Cobinah revealed that four other persons who live around areas hit by the floods remain missing.

Residents in areas like Kaneshie, Ashongman, Westland’s, Adenta, Taifa Cocoa Powder and Trassaco were left frustrated as they spent several hours Monday night salvaging their properties and scooping out rainwater that had flooded their houses.

Aviation Meteorology Inspector at the Ghana Civil Aviation Authority (GCAA), Dr. Steve Nyarkotey Quao, said Tuesday morning that the eastern parts of the country could experience the highest rainfall, as a series of clouds continue to build up in the seas due to changes in temperature and humidity (monsoon) over the land.

The month of June actually marks the onset of the monsoon rains, he said.

The monsoon of western Sub-Saharan Africa migrates northward from the equatorial Atlantic in February and reaches western Africa on or near June 22.