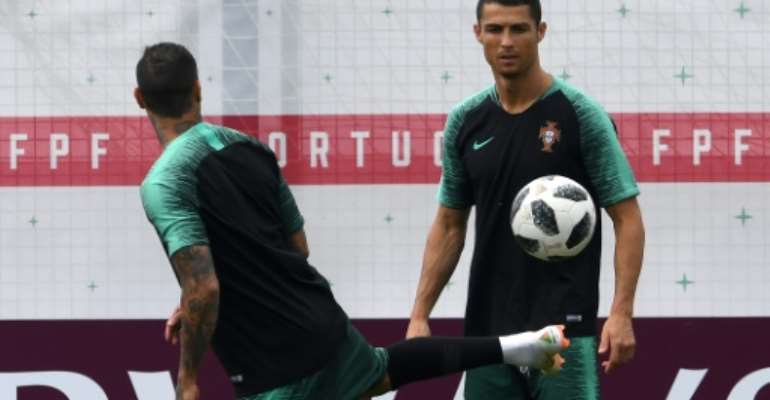 Five-time world player of the year Cristiano Ronaldo (R) bagged a sublime treble against Spain in Portugal's opener in Russia 2018's stand-out match so far, the 51st of his glittering career. By Francisco LEONG (AFP)

Cristiano Ronaldo will hone in on Morocco on Wednesday after his stunning hat-trick in Portugal's World Cup opener, while 2010 winners Spain play Iran in Group B.

The five-time world player of the year bagged a sublime treble against Spain in the heat of Sochi on Friday in Russia 2018's stand-out match so far, the 51st of his glittering career.

"I'm very happy, it's a nice personal record to have, one more in my career," Ronaldo said on Tuesday.

"For me the most important thing is to emphasise what the team did against one of the favourites to win this World Cup." 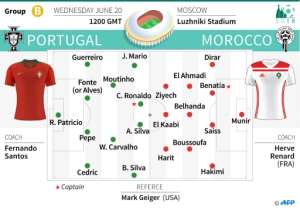 Spain head to Kazan to face Iran still counting the cost of a chaotic run-up to the tournament during which Julen Lopetegui was sensationally sacked just two days before they opened their campaign.

Former international defender Fernando Hierro is now at the helm but barely a week into the tournament Spain -- expected to join Brazil, Germany and France in the latter stages -- have endured more drama than they would have wanted or expected.

"It's a crucial match that will determine our World Cup destiny," said midfielder Isco of the Iran showdown.

"We want to score from the opening minute, even though that won't be easy." 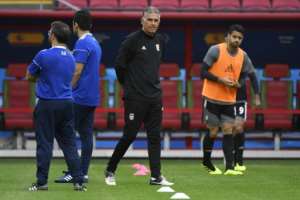 Coach Carlos Queiroz (C) concedes Iran now face one of the biggest challenges in their World Cup history, but maintains they can "make the impossible possible" against Spain. By SAEED KHAN (AFP)

Iran kicked off their campaign with a 1-0 win against Morocco, thanks to a late own goal by Aziz Bouhaddouz, piling the pressure on Spain at Kazan Arena on Wednesday.

Iran sit top of the pile as the only Group B team with a win so far, an achievement that sparked widespread celebrations in the streets of Tehran and elsewhere throughout the Islamic republic.

Coach Carlos Queiroz concedes Iran now face one of the biggest challenges in their World Cup history, but maintains they can "make the impossible possible". 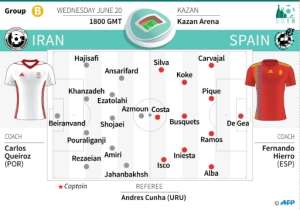 Iran have never beaten a European side at a World Cup -- their only previous victory was a 2-1 win over the United States in France in 1998.

Morocco need to bounce back from their agonising defeat against Iran but Portugal and Ronaldo in particular pose Herve Renard's men a monumental challenge at Moscow's Luzhniki Stadium.

"We lost a battle but we haven't lost the war. We're not dead," said midfielder Faycal Fajr, one of 17 foreign-born players in Morocco's squad.

Uruguay take on Saudi Arabia in Wednesday's other game, with forward Luis Suarez set to mark his 100th appearance for the Celeste in the Group A clash in Rostov-on-Don. 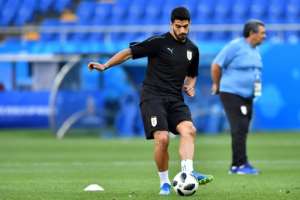 Uruguay's Luis Suarez has exited the last two World Cups in disgrace after being sent off for a handball against Ghana and infamously sinking his teeth into Italy's Giorgio Chiellini in 2014. By JOE KLAMAR (AFP)

The Barcelona man has exited the last two World Cups in disgrace after being sent off for a goal-line handball against Ghana and he infamously sank his teeth into Italy defender Giorgio Chiellini in 2014.

The game itself should be straightforward for Uruguay, who won their opener 1-0 against a Mohamed Salah-less Egypt, as they face a Saudi Arabia team hammered 5-0 by hosts Russia in the tournament's curtain-raiser.

The Saudis' preparations were jolted by a mid-air mishap on Monday when the plane carrying them to Rostov suffered a fire in one of its engines.

The aircraft landed safely after what one of the Saudi players called a "simple malfunction".

Hosts Russia stand on the verge of the knockout stages after Tuesday's 3-1 win over Egypt in Saint Petersburg. 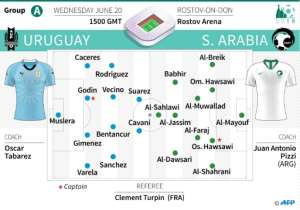 Probable squads for the Group A match between Uruguay and Saudi Arabia at the 2018 World Cup.. By Laurence SAUBADU (AFP)

After a goalless first half, Ahmed Fathi scored an own goal before Denis Cheryshev struck and Artem Dzyuba added a third. Salah scored a consolation penalty late on but it was not enough for the Pharaohs.

Earlier, Senegal secured a first win for an African nation at this tournament, benefiting from a terrible error from Polish goalkeeper Wojciech Szczesny to beat Poland 2-1 in Moscow.