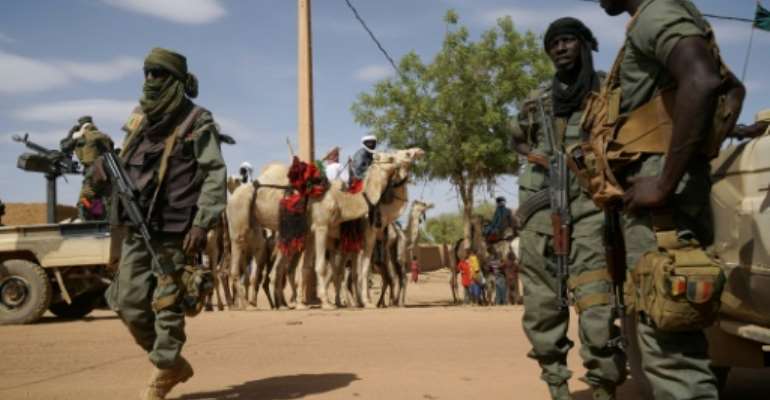 Malian soldiers on patrol in the city of Menaka, Mali in May 2018. By Sebastien RIEUSSEC (AFP/File)

Mali's defence minister on Tuesday admitted soldiers were involved in killings in the country's unstable centre, after the discovery of a mass grave added to accusations of summary executions by government troops.

The announcement came after an NGO called Kisal, which campaigns for the human rights of pastoral communities, said on Monday "25 bodies" had been found in three mass graves.

Prior to the discovery, 25 people from the Fulani ethnic group, who are predominantly herders, had been picked up last week by the army in the localities of Kobaka and Nantaka, Kisal said.

"The inspection mission sent to the area confirms the existence of mass graves implicating some armed forces personnel in serious violations causing the deaths of men in Nantaka and Kobaka," Defence Minister Tiena Coulibaly said.

He said the authorities were "firmly resolved to fight impunity and get soldiers to strictly observe international rights and humanitarian conventions," a statement said.

Central Mali is a vast area where the state is near-absent and jihadists, blamed for exacerbating the dispute, roam with little constraint.

The armed forces are facing increasing accusations of arbitrary arrests and extra-judicial killings in their fight against the insurgents.

On May 19, the army said three Malian soldiers and 12 "terrorists" were killed in fighting at an army camp near the border with Burkina Faso. But locals alleged the dead were all civilians and the army later put out a new statement that spoke of 12 "people" killed.

A resident of Nantaka named Hama Kelly said that troops arrested every person they came across as soon as they arrived in the village.

"They took their mobile phones and identity cards. Afterwards, people who were (members of the) Songhai (ethnic group) were released but all the Fulani were kept behind," Kelly said.

Tensions and violence have intensified in the central Mopti area over the past three years, featuring clashes between Fulani herdsmen and sedentary farmers from other ethnic groups who accuse the pastoralists of colluding with jihadists.

Islamic extremists linked to Al-Qaeda took control of the desert north of Mali in early 2012, but were largely driven out in a French-led military operation launched in January 2013.

The insurgents have changed into nimbler formations operating in rural areas, sometimes winning over local populations by providing basic services and protection from bandits.