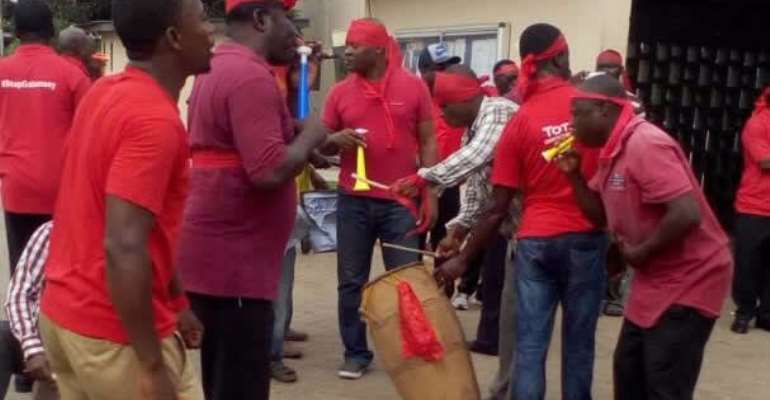 Some of the workers expressing their displeasure

Aggrieved workers of Crocodile Machete Limited, a manufacturing company in the Heavy Industrial Area in Tema, have laid down their tools due to poor working conditions.

According to the over 200 workers, management owes them salary arrears and allowances.

They threatened not to resume work if management failed to give them better working conditions.

The distressed workers expressed their anger last Monday at the forecourt of the company.

Clad in red armed bands amidst drumming and dancing, the workers demanded the abrogation of the contract of two members of staff, who were due for retirement but have been given contract to work.

Addressing a section of the media, the Vice Chairman of the Workers Union, Frank Wilson Aforo, accused the two supposed retirees of seeking their personal interest and not that of the entire workforce.

According to him, the two have negotiated badly with management to worsen the plight of the workers.

He categorically stated that “until management sacks the two pensioners from the company, we are not going to work.”

The vice chairman reiterated that the salaries and allowances of the majority of the workers have been in arrears for several months.