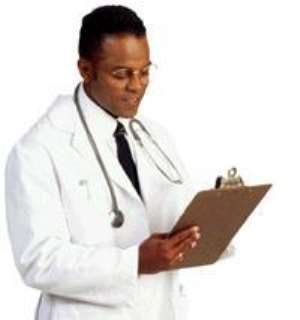 A national of the Democratic Republic of Congo who made a false representation to the Medical and Dental Council and succeeded in getting posted to the Tema General Hospital as "a medical doctor under observation" has been arrested by the security agencies.

Daniel Nktumkanda Ibond has confessed to the security agencies that he was a professional teacher, contrary to his earlier claim to being a medical doctor' trained at the University of Zaire. Sources close to the security agencies said Ibond, who arrived in the country between 1999 and 2000, said he bought the medical certificates which he presented to the Medical and Dental Council from one Bruno in Lome, Togo.

Authorities at the Tema General Hospital confirmed that Ibond reported at the hospital on August 15 with the introductory letter from the Medical and Dental Council which was explicit that he "should observe and not practice."

Graphic investigations indicated that he was, however, arrested on Tuesday, September 6, following a tip-off by an informant who visited the hospital and was told that Ibond had been posted to the hospital by the Medical and Dental Council. The informant, who knew of the background of Ibond, said he did that because he knew of the serious implications of Ibond's false claims and the danger his actions posed to the lives of people.

Authorities at the hospital confirmed the story and said they had already written to the Medical and Dental Council about the incident, which they described as an embarrassment to the hospital. Further investigations are going on to establish the authenticity of allegations that Ibond had been practicing as a medical doctor at his residence. This follows the seizure of prescription forms and other items, as well as a picture depicting him as a qualified medical doctor.

Ibond arrived in the country as a refugee and later applied to be granted that status. He then moved to Aktsi in the Volta Region, where he practiced as an evangelist, before moving to the Tema Regular Baptist Church School at Community 10. He also taught French and claimed to be a chemical consultant, even though he had not work permit and his passport had expired since 2003. The Ghana Medical and Dental Council refused to comment when contacted.