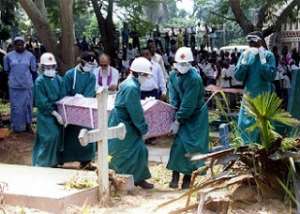 Ebola and Aids will hit Africa in the future as it did in the past because this is the intention of criminal governments and corruptible African regimes. The horrific Aids pandemic tremendously has generated scientific controversies within and outside the scientific establishment.

Only a minority of scientists, like Johan van Dongen, and other engaged people have access to inside information concerning (bio-warfare) Aids and Ebola research.

Besides that, he also administered uncountable agents to recipients of organs in order to trigger, diminish or completely wipe out the immune capacity which can be compared with Aids.

During his university and hospital appointments in the early seventies, and later undercover in the pharmaceutical industry, he discovered that animals don’t die because of rejection of the transplanted organ but because of multiple infections which can be compared with human Aids victims.

So Johan van Dongen noticed that Aids can be induced by radiation, aflatoxins, Immuran/prednisolone combination, anti-lymphocyte sera and many other bio-warfare agents.

Dormant HIV virus
As head of the Department of Experimental Microsurgery, and involved in all transplantation and immunological experiments, Johan also have been involved in many controversies. Especially the connection of his work and the polemic concerning the transmission of HIV.

In many ways, he discovered not only in his experiments but also in the extensive scientific literature the role of an obligatory co-factor that trans-activates the “Dormant” virus HIV in specific human cells.

And this obligatory co-factor which transactivates the “Dormant” virus in specific human cells are deliberately introduced into mostly black-skinned African people, governed by massive environmental factors as you can read in our book: “Aids and Ebola the greatest crime in medical history against mankind,” in order to depopulate Africa.

Therefore we will always like to enlighten readers about the real origin of Aids and the true nature of famous international researchers as Robert Gallo and to enlighten him because of his knowledge of the truth about the man-made origin of Aids we present you an open letter of Leroy Whitfield, which can be read under the title:

THE SECRET PLOT TO DESTROY AFRICAN-AMERICANS