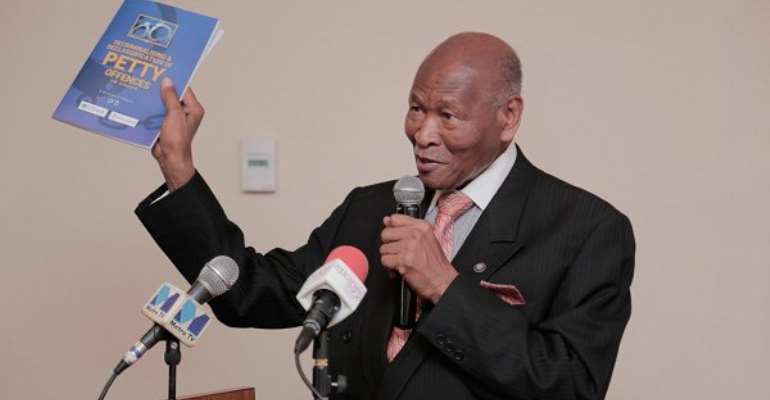 Human rights activists and stakeholders in the justice sector have advocated that people who are involved in petty offences should not be treated as criminals or made to face imprisonment.

In pursuit of this goal, a research report dubbed: “Decriminalising and Declassification of Petty Crimes in Ghana” was launched in Accra on Wednesday.

Key stakeholders in the human rights and justice sector, including the Commissioner of the Commission on Human Rights and Administrative Justice (CHRAJ), Mr Joseph Whittal, and a member of the Council of State, Mr Samuel Okudzeto, were present at the launch.

Representatives of the Ghana Police Service, Legal Aid, the Attorney-General’s Department, Ministry for the Interior and the Ghana Prisons Service were also present to support the initiative.

The research
The 77-page document provides the findings and views of key stakeholders in the justice sector on the need to decriminalise certain petty crimes and declassify others.

Ninety respondents drawn from civil society organisations (CSOs), legal practitioners, the Law Reforms Commission, judges, CHRAJ, the Prisons Service and other stakeholder institutions were relied on for the research.

Among other things, the research recommended that the government should implement a number of non-custodial sentencing regimes as punishment for minor offences and restrict traditional custodial sentences to punishing more serious crimes.

Findings
Presenting the details of the report, the Head of the Public Law Department of the Ghana Institute of Management and Public Administration (GIMPA) Law School, Mr Edmund Amarkwei Foley, said a strong case had been established for petty offences to be decriminalised or reclassified to make the criminal justice system more rehabilitative.

“We found out that there is no clear-cut definition for petty offences in Ghana. But these petty offences affect people who are vulnerable and poor in society.

“Some of the offences that are considered felonies could be stepped down while others ought to be removed from our statutes outrightly,” he stated.

He added that the research report would serve as a basis to engage with Parliament and strengthen advocacy for the introduction of non-custodial sentences and amendments of some of the laws.

Timely launch
Mr Whittal described the launch of the report as timely, saying the time had come to take a second look at the petty crimes and the penalty regimes for such offences.

He called on the Attorney-General’s Department to take a second look at the Criminal and Other Offences Act as part of measures to review the penal justice system.

For his part, Mr Okudzeto observed that the decriminalisation of petty offences would help to decongest the country’s prisons.

“People have sometimes been jailed for stealing cassava or a bunch of bananas and domestic misunderstandings which could be settled through alternative means.

“It is important to take the move to decriminalise these crimes seriously so that poor and vulnerable people do not end up in prison unduly,” he said.

The Innocent Flower Looking Akufo-Addo Is The Mother Serpent...
15 minutes ago