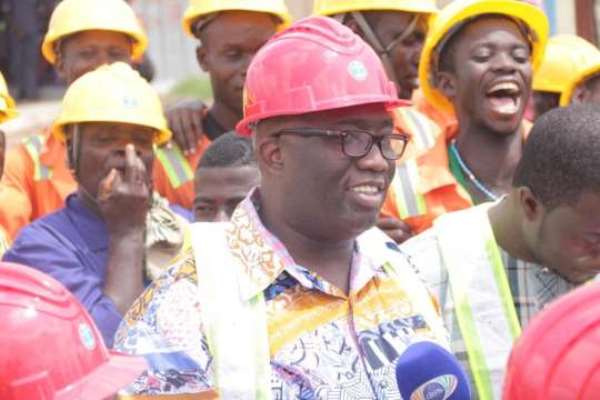 Dr Micheal Anyetei, Engineer and the Deputy Managing Director, Ghana Railway Company Limited, says the activities of encroachers on rail lines and land were stalling progress of the rehabilitation project, which has begun in Accra.

He said the rehabilitation of the Accra-Nsawam railway had started in Accra, but was being hampered by the activities of such encroachers and advised them, especially those within the 100 by 100 feet space along railway lines, to vacate the place to allow for construction work to continue smoothly.

He said people operating their domestic and economic activities within a 100 feet of both sides of the railway lines, were causing a threat and hindrance to the first phase of rehabilitation work on the Accra-Nsawam railway.

Dr Anyetei said this in Accra on Wednesday when the Minister for Railway Development, and a team comprising the Metropolitan Chief Executive of the Accra Municipal Assembly, the Greater Accra Regional minister and his deputy, as well as a team from the Parliamentary Select Committee on Roads and Transport, visited the construction site to inspect progress of on-going work.

The Minister and his delegation inspected stations and lines along the Accra-Nsawam railway line, including; Katamanto, Graphic road, Circle Odawna, Alajo, Dome and Amasaman, where people had encroached and were selling on the tracks, while others had built structures in the 100 feet perimeter along the rail lines.

The encroachers, who the ministry had tried to remove on some occasions, had buried waste along the tracks making the rehabilitation work more difficult, and almost like a reconstruction, as they had to dig out the waste and ensure that the ground was solid enough to carry the weight of the trains.

He said this, as well as resistance from land owners and acquisition of new land, particularly for the Eastern rail lines from Accra to Kumasi, were some of the major challenges confronting the ministry and the railway authorities and urged local chiefs and community leaders to support by encouraging their people to vacate the rail lines to allow the project to progress successfully.

He said work on the first phase had already begun, but was delayed due to the challenge of encroachers and hoped that it will be completed although he did not give timelines for completion especially as materials for the work were yet to be delivered to the country for the second phase.

Mr Joe Ghartey, the Minister of Railway Development, congratulated the engineer and the workers for their dedication towards the work and urged them to continue and assured workers on the project that the ministry would ensure that their salaries were promptly paid.

He also entreated the workers to always be in their protective cloths on the site.

Mr Ayeh-Paye Samuel, the Chairman of the Parliamentary Select Committee on Roads and Transport and Member of Parliament for Ayensuano constituency, said there was the need for relocation of people, especially at Katamanto so that work could move on as it should.

He said government had an agenda of widening already existing roads, ports, the aviation sector among others to ease the transportation of goods and persons, hence the need for a railway system and therefore, called on all to participate, irrespective of their party affiliation, to ensure that the railway project was realised.