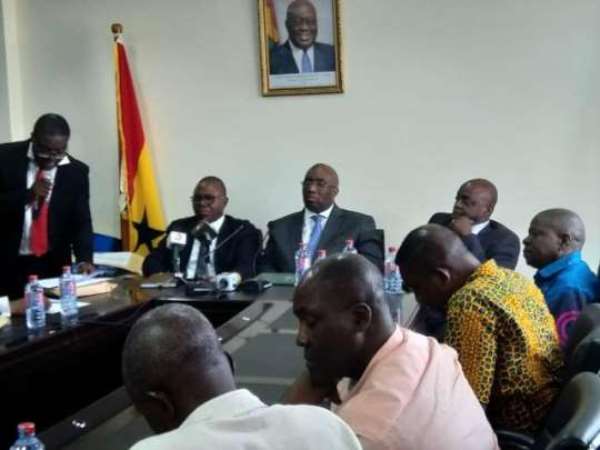 Ketan (W/R), June 13, GNA - The future of Ghana Railway Company Limited under the Ministry of Railway Development is on a positive move with the coming on board of a South African Company, Transnet International Holdings to invest in the sector.

Over the period, many discussions and meetings, aimed at restoring the almost defunct railway sector, under the Akufo-Addo led administration, may bear fruit as the government is committed to the development of the sector.

President Akufo-Addo has described the Railway sector as one of the post-colonial tragedy to ever befall the nation and has vouched to improve on the current narrow gauges to standard ones as well as add to the 947 kilometers left by the colonial masters.

The reciprocal visit by Transnet International holdings, managers of over 30,000 km rail lines and tracks in South Africa to Ghana follows an earlier visit by a delegation led by Ghana's Minister of Railway, Joe Ghartey to South Africa to sign a memorandum of understanding with the company to come on board and help develop the sector.

During an interaction with the team from South Africa, led by Mr Wilson Moaoba, Mr Joe Ghartey said it was the resilience of the railway workers that kept the sector active, despite the numerous challenges, 'We are yet to add more lines to the already existing ones and once this is done, the beginning of our economic liberation also starts'.

Mr Ghartey said government would rehabilitate existing lines, build new ones and expand the scope of operations of Ghana Railways, adding that, 'With your coming, our dream of building some 300 km lines to Kumasi by 2020 is possible'.

He said the visit to South Africa revealed how the rail sector was making significant impact in the daily affairs of the people, adding that, the sector would be fully revitalized with the best of equipment to deliver a world railway service as a measure to restore the past glory of Ghana Railway.

Mr Wilson Moaoba said their visit was to seek a better understanding of how Ghana's Railway sector was working and what support services to be provided for its recovery.

He said his company was well structured and had the funds as well as the technical capacities to resuscitate the railway sector, create employment and improve economic livelihoods of Ghanaians.

Transnet International Holdings would be entering into this partnership through its local partners, Adasa Keteke Company Limited to operate, and manage the railway sector in Ghana.