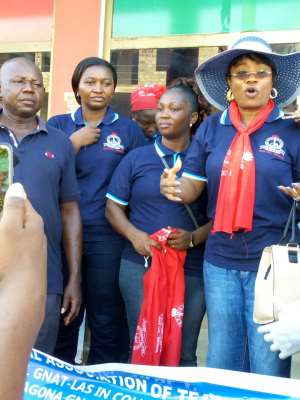 The Women's wing of the Ghana National Association of Teachers properly known as GNAT- LAS last Saturday joined residents of Agona Swedru and its environs to undertake massive clean up exercise as part of the Monthly National Sanitation Day.

The Agona West Municipal Assembly has been organizing the monthly exercise to ensure clean environment.

Over 300 members of the Association partake in the over 4-hour exercise which recorded massive turn up.

Later in an interview with newsmen, the Central Regional Coordinator of GNAT- LAS, Madam Henrietta Baah Edwudzie said the Association joined the exercise to get rid of firth in the municipality thus reducing environmental related diseases.

According to her, teachers have important role to play in combatting firth from the society saying they ought to inculcate the spirit of voluntarism and communal labour in their students to desist from dumping of rubbish anyhow.

" We decided to join the monthly Sanitation Day because as teachers and mothers, it's our responsibility to ensure clean environment in our home and the society as a whole.

The Central Regional branch of GNAT-LAS will continually participate in the National Sanitation Day so as to ensure Disease Free Environment for a healthy society. A healthy people make a wealthy Nation.

This exercise will not be a 9-day wonder, we will be assisting all the Metropolitan, Municipal and District Assemblies in the Central Region in their monthly National Sanitation Day clean up exercise.

Our over 15,000 membership in the Association are battle ready to combat firth. We also carry out public education on sanitation and the need for people to stop indiscriminate dumping of rubbish as well as open defecation"

The Regional Coordinator therefore called on various groups and Associations in the region to emulate the shining examples of GNAT-LAS in the fight against firth.

They expressed their gratitude to other groups and Associations , chiefs, personnel from the Ghana Police Service, Media practitioners, staff of Swedru branch of Melcom group of companies, the clergy, Assembly Members, staff of Zoomlion and the Environmental Health Department for their participation.

He noted that the National Sanitation Day exercise has come to stay so it behooves on all and sundry to contribute to its success.