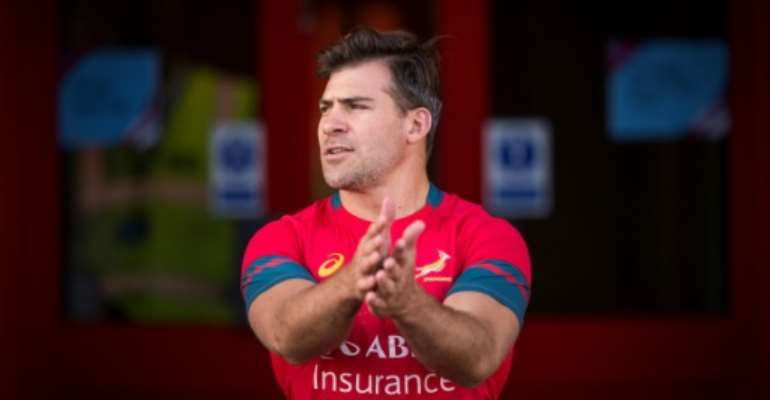 South Africa's hooker Schalk Brits, pictured in 2015, is called up for a Test against England. By LIONEL BONAVENTURE (AFP/File)

South Africa and England added hookers to their squads Monday ahead of the second Test in Bloemfontein this weekend.

The Springboks called up veteran Schalk Brits from English Premiership club Saracens while the Red Rose flew in Jack Singleton of Worcester Warriors.

"Schalk has extensive inside knowledge and experience from playing for Saracens in English and European conditions.

"I want Schalk to perform a similar role to other experienced foreign-based Springboks Duane Vermeulen and Willie le Roux.

"We want our young players rubbing shoulders and learning all about international rugby from these guys."

Bongi Mbonambi is set to remain the first-choice hooker with Akker "Angry Warthog" van der Merwe on the bench.

Singleton has been called up as a precaution after Luke Cowan-Dickie -- the second choice behind Jamie George -- experienced hamstring tightness.

George was elevated to the starting team in the republic after an injury ruled captain and number one hooker Dylan Hartley out of the tour.

England coach Eddie Jones also names his side Thursday as he seeks to snap a five-match losing streak having fallen to Scotland, France, Ireland, the Barbarians and South Africa this year.

Before the Scotland defeat, Australia-born Jones had won 24 of 25 Tests since succeeding Stuart Lancaster after hosts England made a humiliating first-round exit from the 2015 Rugby World Cup.

South Africa will clinch the three-Test series if they win in Bloemfontein, a venue where the Red Rose were routed 58-10 in their last visit 11 years ago.

The Innocent Flower Looking Akufo-Addo Is The Mother Serpent...
8 minutes ago