PIAC And Its Efforts Towards Oil Funded Projects In Ghana 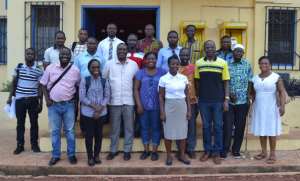 The Public Interest and Accountability Committee [PIAC] is a body established under the Petroleum Revenue Management Act (Act 815) 2011. To ensure its independence and effectiveness, it draws its membership from thirteen non-governmental bodies among which are Trades Union Congress, Ghana Journalist Association, Think Tanks, Ghana Bar Association, Ghana Academy of Arts and Sciences, Civil Society and Community Based Organizations, Association of Ghana Industries and the Ghana Chamber of Commerce, Institute of Chartered Accountants, the Ghana Extractive Industries Transparency Initiative, National Associations of Chiefs and Queen Mothers, Islamic and Christian bodies.

As part of its duties, it has the responsibility of supporting government and parliament through field enquiries and recommendations towards efficient management and utilization of petroleum revenues. Through the Finance Committee of Parliament as well as bilateral engagements with some stakeholder institutions, PIAC had some of its recommendations implemented notable among which are that;

So far it can be said that PIAC together with its media and funding partners, has lived up to expectation. Over the years’ members of the committee have personally gone on field enquiries on projects undertaken with cash from the oil revenues.

It became clear that reports released on some irrigation and education projects undertaken with funds from oil in the Upper West, Upper East and Northern Regions were either nonexistent or not properly undertaken. PIAC has sent reports on shortcomings of those projects to parliament and the presidency and members of the public through the media. PIAC has called for further auditing of documents of the project in question which may lead to the prosecution of those found culpable. Apart from its trip to the three regions of Northern Ghana, PIAC also made a trip to the Brong Ahafo Region lately where some oil funded projects such as school buildings, road projects and Senior High Schools that benefited from oil funds were inspected. The PIAC teams also realized that some of the oil funded projects were poorly undertaken in that region with some of the schools being funded with oil cash facing problems.

The field trips being undertaken by the committee members are quite beneficial. The enquiries and interactions in forums held have led to the following findings.

Some of the people contacted appealed to PIAC to decentralize their operations by creating branches in the regions and districts to ensure timely monitoring and observation of oil funded projects.

The PIAC team discovered that there are delays in providing funds, materials and food to some Senior High Schools in the regions. In order for the SHS in Ghana not to face problems with inadequate food, accommodation for staff and classrooms and dormitories, as the student population increases, there is the need for the authorities to expedite monitoring and institute enquiry to forestall problems in all the schools in future. The PIAC team discovered that some heads of senior secondary schools have devised a means of funding their schools with funds from internally generated funds while they await government funds. The PIAC teams enjoyed their working trip to the Brong Ahafo where the Chief of Ahansua and Baamuhene of Techiman Traditional Area Nana Apenteng Fosu Gyeabour 11 took them round to see for themselves the condition of the roads in town.

The Chairman of PIAC Dr. Steve Manteaw and his Vice Dr. Thomas Stephens who have been leading teams of PIAC to the regions deserve commendation together with members of the committee, the media team and the secretariat staff for their efforts so far. The work of the teams is intensive with their leaders having to educate the people on the ways they enquire on oil funded projects as they visit roads, school projects and other important projects. The interaction of the teams with the people goes beyond the field work. They also interact with them through fora and media discussions especially on radio and television. Although some of the reports provided parliament have been considered, the authorities need to do more. All findings on projects must be thoroughly investigated through physical enquiries and auditing.

Furthermore, there is the need for the government to complete all uncompleted oil funded projects and to pursue proper maintenance culture in respect of the roads and other projects. Since Ghana abounds with deposits there is the need for government through GNPC, to intensify its exploration of oil at sea and land especially on the Voltaian Basin.