Why Akufo-Addo Does Not Support Freddie Blay 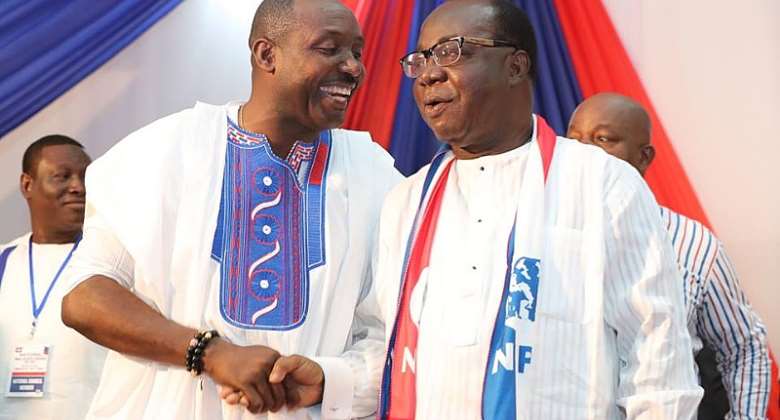 His Excellency President Nana Addo Dankwa Akufo-Addo’s choice of Prof. Aaron Mike Ocquaye, a long-serving and dyed-in-the-wool Danquah-Busia-Dombo person, over Mr Freddie Blay for the position of the Speaker of Parliament should inform New Patriotic Party (NPP) delegates that the party needs thoroughbred NPP members who can project, promote and protect the values and ideology of the UP tradition to occupy certain sensitive positions in the party.

That explains why despite the fact that Mr Blay expressed interest and campaigned for the position, hoping to be appointed as the Speaker of Parliament, the president and the Council of Elders of the NPP did not consider him ideal to represent the NPP at that level.

As the NPP soon gathers in the Eastern regional capital of Koforidua for its national elective congress, the most important position delegates will be required to vote for is the National Chairmanship.

The chairmanship position of the NPP – like any other party – is the soul of the party. It is a job that defines the party’s ideology and its strategy for the next election. Therefore, anyone elected to hold that position must be a dyed-in-the-wool UP person who is the exact embodiment of the ideals, philosophy and values of the Danquah-Busia-Dombo tradition who is in touch with the base of the party and possess a set of skills that could rally the grassroots members of the party in unison towards winning election 2020.

The NPP has a long proud history of electing national chairmen who are strong adherents and true examples of the UP tradition and uphold it with pride. These include Messrs B. J. da Rocha, Peter Ala Adjatey, Samuel Odoi-Sykes, Harouna Esseku, Peter MacManu, Jake Obetsebi-Lamptey etc.

It would, therefore, be a grand betrayal of the founders of the NPP if the current generation of the party deviates from the examples bequeathed to the party. The tradition must be kept intact and unadulterated. The NPP must elect Mr Stephen Ayensu Ntim, a founding member of the NPP and a dyed-in-the-wool UP person over Mr Freddy Blay, a former Convention People’s Party (CPP) Member of Parliament and Nkrumaist.

Why Stephen Ntim Is The Perfect Fit To Lead The NPP

Mr Stephen Ntim is a long-standing member and national patron of the NPP and has gone through the mill of the party. He is a true grassroots person who has risen through the ranks of the NPP.

Mr Ntim is a former 1st Vice Chairman of the NPP, and during his tenure he donated fourteen (14) vehicles to all the regions and some constituencies. He has been acting National Chairman for the NPP on many occasions.

In the 2012 electioneering campaigns, he was the co-ordinator for Traditional Rulers Project together with Mr S. K. Boafo. In that same period, Mr Ntim additionally served as the Brong Ahafo region Conflict Resolution Committee chairman. He was also a campaign member for that election while serving as the Brong Ahafo region Finance Committee chairman.

In 2014, during Nana Akufo-Addo’s flagbearership campaign, Mr Stephen Ntim was his campaign coordinator for the Middle-belt sector.

Mr Stephen Ntim was the Fundraising Committee chairman raising funds for the NPP campaign from 2014 to the 2016 elections.

Again, in the 2016 campaigns, Mr Ntim was the coordinator of the Settler Communities Project. He served as NPP’s polling agent in the 2016 election at the Methodist School Pooling Station, Wamfie, Dormaa East Constituency, Brong Ahafo region.

Mr Stephen Ntim has consistently been resourcing the NPP from his own pocket. He has been providing personalized letterheads to all constituency and regional offices every four years at no cost to the party.

Today the NPP has majority MPs in Parliament because Mr Stephen Ntim assisted a lot of them with T-shirts, posters, sample ballot papers and other logistics.

Mr Ntim once adopted all the constituencies in the Volta region and gave them seed money for the building of party offices.

Mr Stephen Ntim’s steadfastness, commitment and loyalty to the NPP supersede any in the race for the chairmanship. These virtues were extolled by Asantehene Otumfuor Osei Tutu II, who described Mr Ntim as dedicated, hardworking and loyal deserving the NPP chairmanship position.

Why Freddie Blay Is Not Fit To Lead NPP
Many die-hard NPP members have questioned Mr Freddie Blay’s loyalty and commitment to the NPP.

During the 2016 electioneering campaign, whilst Mr Stephen Ntim was leading the fundraising committee to raise funds to execute Nana Akufo-Addo’s campaign, Mr Blay was promoting president John Mahama through his newspaper, the Daily Guide, which was running adverts for president John Mahama and promoting his re-election bid. He put his personal interest above the NPP interest. Despite the anger expressed by many NPP members, Mr Blay insisted that despite the newspaper being a pro-NPP, the company must also look at the business side and also make money, asking, “How can the paper survive without John Mahama’s adverts?”

Again, many people believe that the acting chairman’s ownership of the Daily Guide is not doing the NPP any good and often gives the NDC ammunitions to attack the NPP because of stories they believe Mr Blay had planted in the paper. An example is the allegations published by the Daily Guide that the Asantehene bribed Supreme Court Judges in the Election Petition case to rule against the NPP. The NDC and some loyalists of Asantehene keep accusing the NPP and the acting NPP chairman of planting that story just to denigrate the Asantehene. This creates disaffection for the NPP. It is therefore only appropriate to separate the NPP from the paper’s owner by changing Mr Freddie Blay as chairman of the NPP.

Going into the 2020 election with the party chairman in such conflict of interest position could prove costly for the NPP’s fortunes.

Mr Blay is also considered unworthy to hold the position as the NPP chairman because of his alleged involvement in diverting party funds into a private Ecobank account. Many party members are unsatisfied with the way the issue was handled by his administration.

Lessons From The NDC And ANC
The NPP has become so attractive and appealing so much so that people are leaving their parties to join thus making the NPP the largest political party in Ghana today. This has become possible due largely to the party’s strict adherence to its well-known core values of rewarding long service, dedication, steadfastness and loyalty to the party.

Deviating from that value system is repeating the National Democratic Congress’s (NDC’s) mistakes which cost them so much.

It is public knowledge that one of the main factors that caused the NDC to lose the 2000 and the 2004 elections was because of the breaking away of the likes of Mr Goosie Tandoh to form the National Reform Party (NRP) and Dr Obed Asamoah and others’ breakaway to form the National Democratic Party (NDP).

These breakaways were as a result of the fact that founding and long-serving members of the NDC and its PNDC antecedent who had remained loyal and committed to the party were bypassed and an outsider, Prof John Evans Atta Mills, brought in to succeed Flt. Lt Jerry Rawlings after his constitutionally mandated tenure had ended.

This created apathy and division in the NDC leading to their loss. The NPP must not do that mistake.

Conversely, in South Africa, when President Nelson Mandela was leaving the presidency, his choice of replacement was Mr Cyril Ramaphosa. But when his party, the African National Congress (ANC), went to congress, they elected Mr Thabo Mbeki, who was Mr Mandela’s Deputy President.

Regional Balance
In order to build a very strong case for itself and become continuously attractive to all and sundry, the NPP needs to seize every opportunity to be regionally balanced in nature.

In the past, the NPP has had national chairmen from four regions made up of:

The Brong Ahafo, Volta, Ashanti, Eastern, Upper East and West have not been given the opportunity yet. Mr Stephen Ntim is not only from the Brong Ahafo region, but also a very competent, credible and formidable candidate for the post.