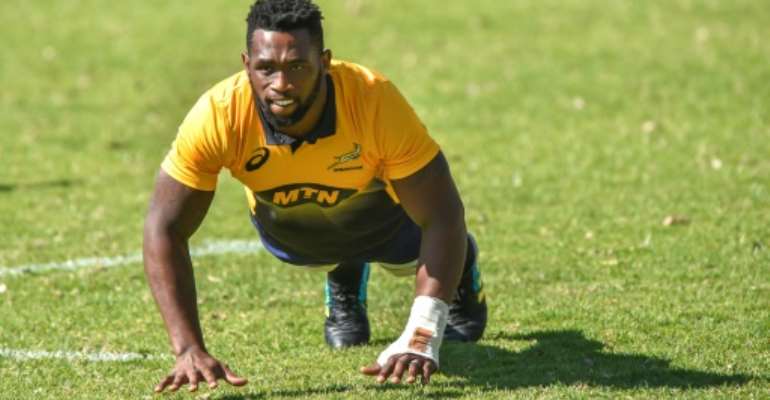 South African flanker Siya Kolisi, the first black Test captain who will lead South Africa in a three-Test series against England in June, attends the first Springboks training session at St Stithies College in Johannesburg in May 2018. By Christiaan Kotze (AFP/File)

Siyamthanda 'Siya' Kolisi, who will become South Africa's first black Test captain Saturday, has confidence in his youthful side for the first Test against higher-ranked England in Johannesburg.

On the eve of his historic debut as the first black skipper after 127 years of white captains, the flanker told journalists his belief in his squad was unshakable despite it including many young players.

There are three new caps in a run-on team that will include a record-equalling seven blacks if tighthead prop Trevor Nyakane passes a fitness test on a rib injury that has been put back to Saturday.

"Every individual on the team that will be playing feels like they belong there. No one feels like they haven't earned their spot. We all worked hard and played (trained) well.

"Me and the guys all feel we deserve to be on the team and the coach has helped us to develop that confidence."

England, ranked third in the world and four places above South Africa, will test the youthful home team at Ellis Park stadium and Kolisi is aware that the youngsters will have to "fight for opportunities.

"What is important is that we put in the work. We can't be scared, we need to be focused, we need to show them that we want this because we know that at Test rugby level, everyone is good (and) it comes down to who wants it more."

Kolisi also reflected on his first opportunity to wear the green and gold colours -- five years ago he made his Test debut as a 21-year-old against Scotland in Nelspruit.

"I remember everything about my debut. I was sitting on the bench, and I wasn't watching the game early on. I was drinking water and spitting it out for some reason, probably because I was so nervous.

"Johann van Graan (an assistant coach) quickly pulled me aside, though, and just told me to forget everything because I had been struggling a bit in the week with getting to know all the new stuff.

Kolisi has come a long way since. His father, wife and children will be among the Ellis Park crowd rooting for him.