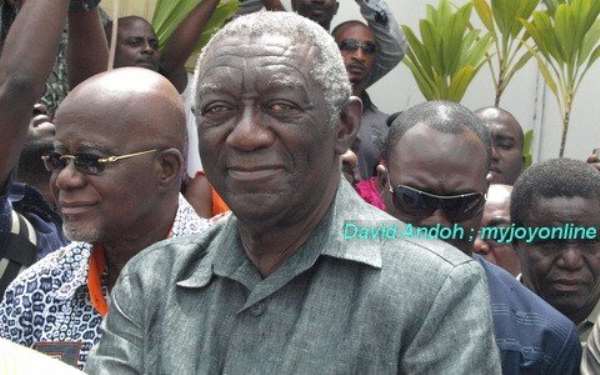 The AU Arts Festival Foundation is appealing to the government to consider immortalising President John Agyekum Kufuor, the second President of the Fourth Republic, with a day in his honour as a national holiday.

According to the chairman of the foundation, Kojo Ampah Sahara, the move will constantly serve as a reminder to Ghanaians what the country achieved under the leadership of the statesman.

Speaking at the launch of a three day Arts Exhibition in honour of the former President in Accra, the AU Arts Festival Foundation Chairman stated that the achievements of President Kufuor in both private and public life towers among his peers by far in Africa.

“He is unmatchable among his peers and contemporary leaders in Africa. He deserves a great honour to remind potential leaders of a great person that once governed the country. A holiday to celebrate him should be in order,” he said.

He mentioned the capitation grant, the metro mass transit, the national health insurance scheme, the successful redenomination of the cedi, the oil discovery, and the dramatic improvement of the living conditions of the average Ghanaian as some of the landmark achievements in the Kufuor era.

“Historians are more interested in these achievements. These achievements are monumental and groundbreaking. The nation must revere him for giving Ghana its second independence,” Mr Ampah explained.

The ceremony which was under the theme: Leadership, Africa through Arts, celebrating President John Agyekum Kufuor, 2nd President of the Republic of Ghana attracted the high profile political figures.

The AU Arts Festival, 2018 was organized by Malaika Media, OK Communications with collaboration from the JAK Foundation. The event was aimed at raising part of the 80 million Ghana Cedis for the John Agyekum Kufuor Foundation.