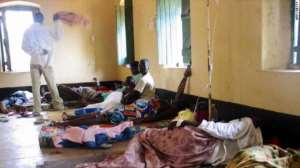 LAGOS, June 07, (Xinhua) - Cholera cases in north eastern Nigeria's Adamawa state have risen above 1,000 with 18 deaths since the outbreak of the water-borne disease, heath authorities have said.

Mohammed Abubakar, state ministry of health spokesperson, told reporters in Yola, the state capital, that the cases had reached 1,078.

He said 44 new cases were reported, out of which 11 were admitted for treatment, while 33 were stabilized and sent home.

Meanwhile, the World Health Organization (WHO) has embarked on an intensive house-to-house search for new cases in Mubi town of the state.

Incident Manager of the Emergency Operation Center (EOC) in Mubi, Kabiru Sadiq, said the search had assisted in early detection and had reduced the fatality rate of the outbreak from the initial 17 percent to 1.7 percent.

Cholera is an extremely virulent disease characterized in its most severe form by sudden onset of acute watery diarrhoea that can lead to death by severe dehydration.

The outbreak is common in Nigeria due to the poor water supply systems, especially in densely populated areas.