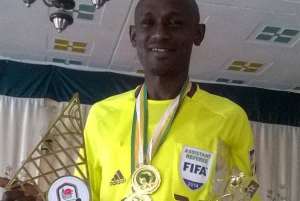 Kenyan referee Aden Range Marwa has lost his place as a match official for the 2018 FIFA World Cup in Russia after being captured in an investigative journalism documentary accepting a $600 bribe to determine the outcome a Kenyan Premier League game.

The sting which implicated Marwa was part of an Africa-wide operation by investigative journalist Anas Aremeyaw Anas which sought to expose incidents of corruption in West African and Kenyan football.

With only eight days to the start of the FIFA World Cup, Marwa has withdrawn from officiating games after he was captured in a video receiving a $600 bribe from an undercover reporter who posed as a Ghanaian club official.

However, according to a BBC report, Marwa has repeatedly denied any wrongdoing.

Marwa, a chemistry and maths teacher was expected to officiate games as a linesman at the 2018 FIFA World Cup in Russia.

He was the only Kenyan and one of only two East Africans selected by world football governing body FIFA as part of a 16-man contingent of African referees for the World Cup.

In the Ghanaian part of the investigation which premiered on June 6 in Accra, 77 Ghanaian referees and 14 Ghana Football Association (GFA) officials were captured allegedly engaging in acts of corruption.

The GFA President Kwesi Nyantakyi who is currently the subject of a Police probe after President Akufo-Addo filed a complaint against him after watching a part of the #Number12 documentary before its premiere.