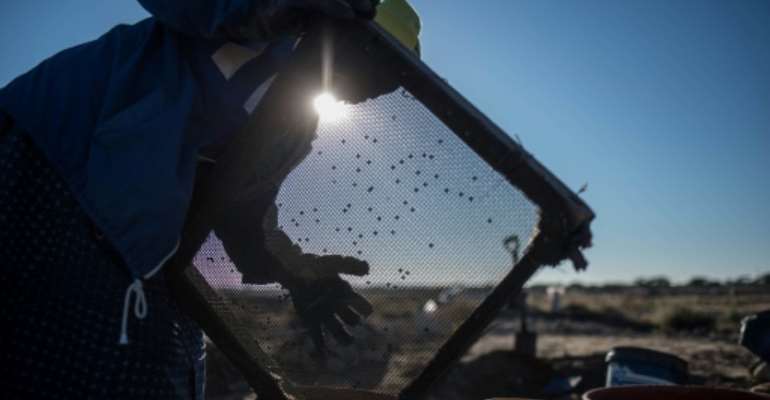 Clara Maitse is one of hundreds of small-scale miners to have received licences to operate on a vast tract of land near Kimberley in the country's centre. By MUJAHID SAFODIEN (AFP)

Grandmother Clara Maitse, 77, has been arrested seven times over the past decade for illegally mining precious stones in Kimberley, South Africa's diamond hub.

Despite the steep legal penalties for DIY mining, the mother of 11 was not "scared of being arrested because the earth and its minerals belong to us black people".

Unlike formal mining operations, small-scale miners pan for precious minerals around the edge of established quarries in the hope of coming up lucky.

"We voted for Mandela and now there is no more fear," added Maitse.

Her defiant patience has paid off and small-scale mining, an industry that employs many thousands of people, has been decriminalised for the first time under a permit system.

In April, Maitse and 800 other illicit miners received licences to operate on a vast tract of land near Kimberley in the country's centre.

The landmark deal was aimed at curbing the rapid growth of illegal mining which has been spurred on by rising unemployment.

"Once you formalise it, it solves many problems." 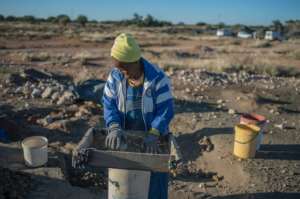 Maitse, a mother of 11, turned to illegal mining to provide for her nine grandchildren after three of her daughters died. By MUJAHID SAFODIEN (AFP)

Armed with rudimentary hand tools, workers set off from their shacks at sunrise to work the soil.

Dotted across a vast plain, they shovel gravel into recycled plastic buckets before sieving it for hidden treasures.

"I feel very relieved now that we have licences," said Maitse, a former maid, as she crushed clumps of soil in search of precious stones. "Beautiful money is what we will get."

Maitse, who lives with her 94-year-old husband, turned to illegal mining to provide for her nine grandchildren after three of her daughters died.

Obakeng Monyera, 36, has been working the soil around Kimberley since 2007 and has dozens of scars from where police fired rubber bullets at him and other illicit miners.

'Millionaires in the making'

"I don't even remember how many times we have been arrested, we were beaten by dogs, chased with helicopters -- just to try to break our spirit," said Monyera.

"We were treated like terrorists. Now we are millionaires-in-the-making," added Monyera, who has thick locks and goes by the name "Rasta".

"It was a hard journey." 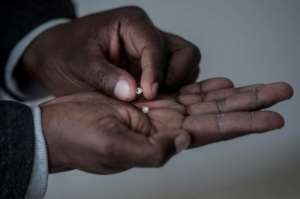 The choice of Kimberley for the small-scale diamond mining pilot is highly symbolic as the hub of the country's mining sector and where gem giant De Beers was founded in 1888 by British colonialist Cecil Rhodes. By MUJAHID SAFODIEN (AFP)

The new permits have meant more than just increased earnings for the miners -- they have restored their dignity.

She laboured for 12 months without uncovering a single diamond.

It was around that time that her and others decided to lobby the government for recognition.

After more than a year of protests and negotiation "change came to our lives", said Louw.

Fighting to hold back tears, she described the "happiness, that pride, when you wake up in the morning saying 'I'm not an illegal miner anymore'".

Oliphant, the deputy minister, agreed that decriminalisation had brought about greater dignity and certainty.

"When we gave them the licences, you could see the sparkle in their eyes," he said.

The diamond mining pilot saw the newly-licensed informal miners given access to 500 hectares (1,200 acres) of land owned by Kimberley Ekapa Mining -- a joint venture between Petra Diamonds and Ekapa Mining.

"It's been a long time coming, it's something we have always envisaged," said Petra Diamonds spokesman Gert Klopper who added that industrial mining and small-scale miners "can co-exist".

The company's security officers used to chase away the miners but now they protect them.

The choice of Kimberley for the small-scale diamond mining pilot is highly symbolic as the hub of the country's mining sector and where gem giant De Beers was founded in 1888 by British colonialist Cecil Rhodes.

It is also the home of the Kimberley Process, an international certification scheme to keep conflict diamonds off the market.

The informal miners can make discoveries worth as much as 20 million rand a month although weeks go past without major discoveries.

Sleek Mercedes-Benz and SUVs clog the dusty narrow roads around the informal mine, testament to the success of some who toil there. Others travel to work on foot and live in squalor.

"This is a milestone and we hope it will be a turning point for other zama-zamas," said Sifiso Dladla, who works for British charity ActionAid supporting mining communities.

According to the International Labour Organisation, up to 20 percent of the world's diamonds are dug-up by independent miners like Louw and Monyera.

"Communities affected by mining have never benefited from mining," added Dladla. Until now.