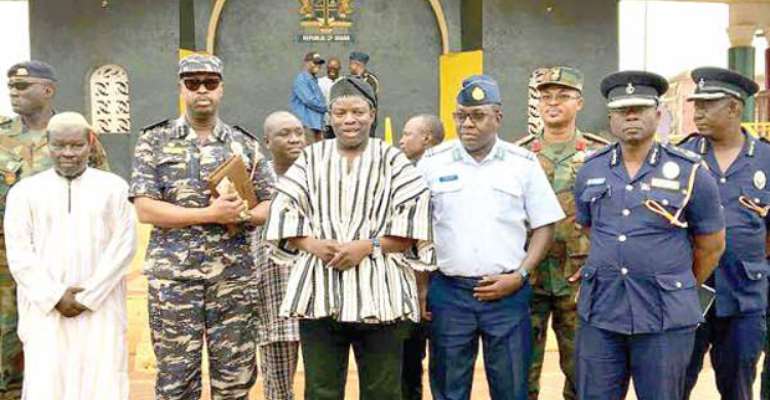 The Minister in smock and members of the regional security council

Describing the clashes as unfortunate, the regional minister appealed to the two tribes to seize fire and let peace prevail in the catchment area, especially considering the fact that it's the season for farming.

According to him, it is the desire of his outfit to see the region take the lead in the production of food under the 'Planting for Food and Jobs' policy initiated by the government.

The minister asserted that clashes and violence in the region would be a major hindrance to the attainment of any desired goal.

Mr Sa-eed therefore called on the various tribes and residents in Chereponi and the region at large to remain calm.

He however admonished them to channel their energies into productive ventures.

DAILY GUIDE gathers that Members of Parliament for both Saboba and Chereponi are committed to ensuring the restoration of peace in the Chereponi and its environs.

Two persons have been confirmed dead in a clash between Konkombas and Chekosis at Naaduni village near Chereponi in the Northern Region.

Information available to DAILY GUIDE indicates police investigations at Naaduni village  revealed that two persons from the Konkomba settlement namely Kura Mustapha, 35 and Mohamadu Baafim, 42 died as a result of the clash.

The bodies of the two deceased persons have been conveyed to the Tamale Teaching Hospital  morgue for preservation and autopsy.

The Northern Regional Police (PRO), DSP Mohammed Yussif Tanko, who confirmed the incident  to DAILY GUIDE, said when the police got to Achuma village near Naaduni village, some young men on seeing the team took to their heels but were pursued by the team.

He disclosed that at the Naaduni village, the team visited the Konkomba settlement and observed that 10 houses, two motor bikes, five bicycles, foodstuffs including cassava, maize, beans, rice, soya beans and pepper had been burnt; whereas a number of BB cartridges were seen at the scene.

The chief and his elders have been arrested and detained at the Yendi Police Station to assist in investigations.

Meanwhile, a joint police and military personnel's have been deployed to the said villages to  protect lives and property.