How Suddenly The United Nations Has Become United Criminals 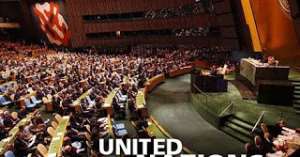 On his campaign trail, Donald Trump promised to make America great once again, if he becomes the next president of America. Does it mean that there is something sinister going on in the country which he doesn't like? Or simply things are falling apart so he needs to fix them.

We don't know why and how Donald Trump is going to do that. Probably to expose the medical crimes such as Aids and Ebola inflicted on innocent Africans by Europe and America or simply bring to an end those medical crimes. God only knows.

But frankly speaking, there is something terribly wrong in America. There are people or elites playing God. They decide who should live and those who deserve to die to avoid overpopulation. Unfortunately, the Third World Counties have become the target.

It's shocking that after five years of denial, the UN has admitted its part in bringing cholera to Haiti during disaster relief measures following the 2010 earthquake that devastated the country. Hundreds of thousands of Haitians have caught the disease from the ongoing outbreak, which has resulted in an estimated 10,000 deaths.

In an email New York Times, Farhan Haq, deputy spokesman for the UN secretary-general, said that “over the past year, the UN has become convinced that it needs to do much more regarding its own involvement in the initial outbreak and the suffering of those affected by cholera.”

It is the first time a UN spokesperson has acknowledged the agency’s role in causing the first cholera outbreak the country has seen in almost a century. The disease is now endemic in Haiti. The admission comes after the Times obtained a confidential report authored by New York University professor of law Philip Alston, an adviser the UN.

According to the Times, the strongly worded report argues cholera “would not have broken out but for the actions of the United Nations” and laments how the organization’s cholera eradication program in Haiti has failed.

Alston says that the UN’s refusal to accept responsibility for the outbreak undermines its credibility, integrity, and ability to uphold human rights. Investigations of the outbreak pinpointed the first cases to an area occupied by UN peacekeepers who had recently been reassigned from Nepal, which at the time was besieged by its own eruption of cholera.

In another development, Yoichi Shimatsu writes, "the cross-border escape of ebola into neighboring Sierra Leone and Liberia indicates something went terribly wrong during the illegal clinical trials by a major pharmaceutical company. Through the lens darkly, the release of ebola may well have been an act of biowarfare in the post-colonial struggle to control mineral-rich West Africa

Earlier this year, rural residents eagerly stood in line to receive vaccinations from foreign-funded medical programs. Since the cover-up of the initial outbreak, however, panicked West African rural folks are terrified of any treatment from international aid programs for fear of a rumored genocide campaign.

The mass hysteria is also fueled in a region traditionally targeted by Western pedophiles by the fact that filovirus survives longer in semen than in other body fluids, a point that resulted in murderous attacks on young men believed to be homosexuals. Ebola detonated fear and loathing, and perhaps that is exactly the intended objective of a destabilization strategy.

This ongoing series of investigative journalism reports on the ebola crisis exposes how West Africans are largely justified in their distrust of the Western aid agencies that unleashed, whether by mistake or deliberate intent, the most virulent virus known to man."

The FBI and the International Court of Justice are corrupt

While all such medical crimes are going on the FBI and the International Court of Justice in The Hague are sitting in limbo watching. The confession of the United Nations of playing a role in Haiti's cholera epidemic in 2010, during the earthquake disaster, is enough for FBI to shut down the offices of the United Nations because they are involved in a medical crime of which they have confessed, yet the FBI did nothing.

What about the International Court of Justice in The Hague? What did they do about the confession of the medical crime? The white-collar criminals and hypocrites brought people like Charles Taylor of Liberia and Hissen Habre of Chad to the Hague and told the world that they have committed crime against humanity, so they deserve to go to prison. Stinking hypocrites.

Crime is an act committed in violation of law where the consequence of conviction by a court is punishment. The FBI and the International Court of Justice must be reminded. The definition didn't say those who commit (Europe and America) crime against Third World Countries should enjoy impunity and but African leaders against Africans should go to prison. What a sick society we are living in?