Another disaster looms for Bombers, if ... 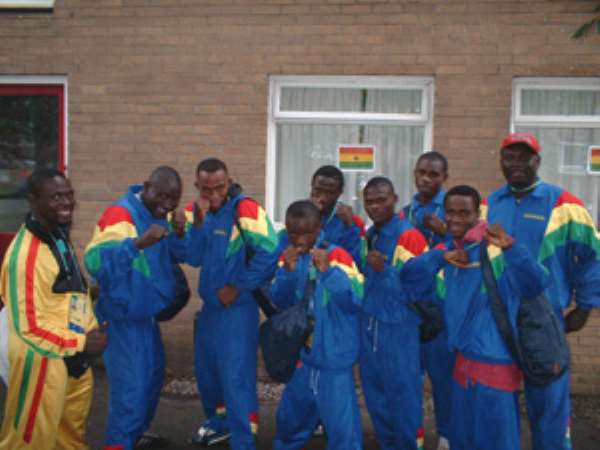 Accra, Sept. 8, GNA - The whole country is engulfed in euphoria and all the talk is about the success of the Black Stars in the African Zone Two qualifiers of the 2006 FIFA World Cup billed for Germany. The celebrations are justified considering the fact that the Black Stars are on the threshold of making history, as their qualification to the global soccer carnival is almost a done deal.

But coming ahead of the summer soccer show next year are the Commonwealth Games slated for Melbourne, Australia in March. The Melbourne Games will as usual, put the sporting credentials of Ghana and other Commonwealth countries to test and international plaudits and accolades will paint the maps of successful countries in gold, silver and bronze.

While nothing seems to be happening on the local front by way of preparations, we must take consolation and nurse hope in the good form being shown by some of our overseas athletes. The Gaisah's, the Zakari's, the Simpson's and the Anim's hold promise for us, but what can we say about the national amateur boxing team, the Black Bombers, which used to be the flagship of the Ghanaian contingent to sporting events.

The debacle at the All Africa Games in Abuja in 2003 and the failure of Ghana to get a single successful boxer through the qualification process to the Athens Olympic Games last year, to say the least, marked an appalling trend in our boxing history.

It only means that the sport, which had won us numerous medals in continental and intercontinental competitions has sunk to the nadir and unless radical measures are taken to ameliorate the situation, our only pride, in relation to amateur boxing will be in the history books. In analysing the poor form of our boxers in Abuja two years ago, Mr Benson T. Baba, President of the Ghana Olympic Committee and Dr Emmanuel Owusu Ansah, Technical Director at the Ministry of Education and Sports, who was then the Chief Executive of the National Sports Council blamed the situation on technical reasons.

The two sports connoisseurs believed the boys had the power and the zeal to box but lacked the basic formulae and tactics, which amateurs must apply to win fights.

So when the Ghana Amateur Boxing Association (GABA) was reconstituted early in the year, concerned members of the boxing fraternity felt the time had come for steps to be taken to steer the sport from mediocrity onto a pedestal of success.

But with less than six months to the Commonwealth Games, nothing drastic has happened by way of appointments and preparations. The technical team that had supervised our failure over the years is still in control, making nonsense of the change of guard in officialdom.

In a recent chat with Mr Eddie Blay, Chairman of the GABA, and the former Olympic medallist confirmed to the GNA Sports in the presence of Mr Moses Foh Amoaning, Chairman of the Ghana Boxing Association, (GBA) of the technical deficiency of trainers of the Bombers. "After watching the coach train the boys with the pad, I realised he was training himself and not the boys.

"He was very enthusiastic but lacked the ability to prepare the boys effectively," Mr Blay said.

But despite the overwhelming evidence about the poor knowledge of the technical handlers of the Bombers, nothing has been done to improve their position.

While Mr Blay is advocating for a Cuban coach, concerned followers of the sport believe there are a lot of former boxers in the country who are capable of redefining the face of amateur boxing.

One of those who felt the former boxers hold the key to the rejuvenation of the sport is Professor Azumah Nelson, former World Boxing Council featherweight and super featherweight champion. In a chat with some sports writers in Accra last month, the boxing professor said it was absurd that the national amateur boxing team of Ghana was being coached by people who did not achieve anything in the sport.

He said the country abounds with former boxers, who distinguished themselves and were capable of imparting their knowledge to the new generation of pugilists.

Having listened to many opinions about the status of the Bombers and how to move away from the failure of the past to a new beginning of hope and promise, it will be necessary to hold the bull by the horn. The time has come for new hands to take charge of the team if we actually want to get back to winning ways in Australia. Eddie Blay must have the moral courage to call for new hands in order to pull amateur boxing from the garbage bin and give it a shine that will make all of us proud.

GABA should also organise inter club and regional competitions to select worthy young boys into the team and prepare them adequately so that we avoid another disgrace where our boxers become punching bags for their opponents.

Another disaster looms for the Bombers in Melbourne if we fail to brace up to the task that must be done.

Ghana amateur boxing is at crossroads and this is an SOS message to save it from further decline. Keep shooting!

Census: People suspect us to be armed robbers, some attack u...
38 minutes ago