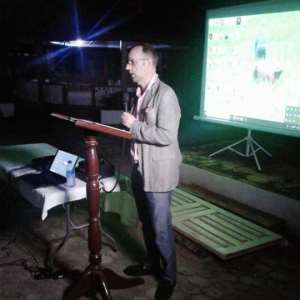 The Centre for Agriculture and Biosciences International (CABI) in collaboration with Countrywise Communication Ghana has launched two films to educate farmers to grow soybean and prevention of fall army worm infestation.

The movies, translated into eight local languages, would be screened in 200 communities in Northern, Upper East and Upper West regions by Countrywise Communication Ghana.

Speaking during the launching programme in Wa, Mr Duncan Sones, Communication Specialist, CABI noted that one of the films looked at how to grow soybean while the other focused on helping farmers to recognize and confront fall army worm.

He also said this year screening of the films would centre on agro-dealers who stock legume inputs of Phosphate fertilizer and Sarifix.

'Demonstration plots are a way that farmers like to learn - but we think films offered a very good value alternative to let farmers see with their own eyes how to grow a crop like soybean or respond to another challenge like protecting themselves from fall army worm', he said.

He said gender equality in terms of access to information was important and noted through the screenings knowledge would be shared on first-hand information with family members including the young and old, men and women.

He expressed confidence that they would see a lot more investment in legume technologies over the coming years especially in Sarifix and hoped it would become a product legume farmers would use to boost production of groundnut, cowpea and soybean.

On the fall army worm, Mr Sones said, CABI was collaborating with government to help farmers recognize and counter terrible effects of pests.

The Bill and Melinda Gates Foundation and UKAID were praised for funding production of the film while Savannah Agriculture Research Institute (SARI) also applauded for helping to check its contents with Green-Ef given accolade for helping to develop the distribution strategy.

He expressed the hope that at the end of the project, farmers would see a considerable change in their yields and adopt best practices in soybean production and prevention of fall army worm infestation.

Screening of the movies would start from now till soybeans are being planted.