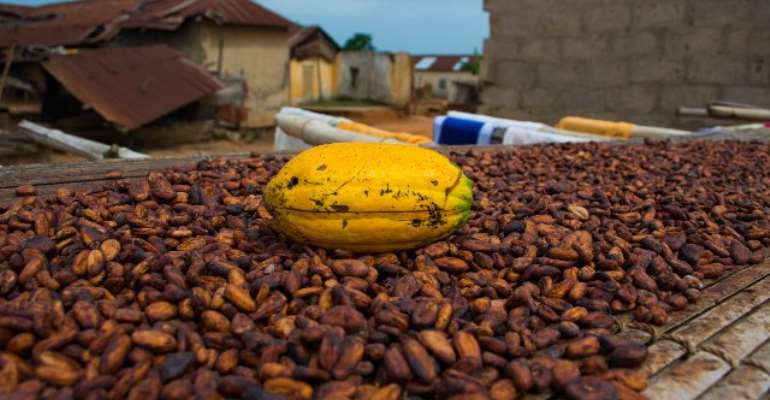 Environmentalists fear Ghana’s healthy cocoa production sector is in severe danger due to the sudden influx of deforestation.

For the past two decades, the government has set a goal to produce one million tonnes of cocoa per year, but numbers are falling short.

Cocoa is a critical driver of Ghana’s growth, bringing in about 6% of the country’s GDP, employing more than 100,000 people and supporting the livelihoods of about 2.5 million inhabitants, but deforestation is reducing those numbers at an alarming rate.

Dozens of chopped trees lay lifeless at a local forest in Ghana.

“At the beginning of the last century, Ghana tried to establish forest banks with almost 8 million hectares of forest but all has been lost to illegal activities,” said Abraham Baffoe, Africa Regional Director of ProForest at the Tropical Africa Alliance (TFA) Global Assembly. "Just about 1.8 million that was also reserved for permanent forest had been lost.”

Currently, Ghana has the highest rate of deforestation out of 65 nations, apart from Togo and Nigeria. A Wood Products Trade Group study shows Ghana loses about 2% of its forests each year due to legal and illegal tampering of the forests.

“Over the last 100 years, we have lost almost everything to the extent that even some of the reserves have been converted to agriculture, which means that we no longer have even 1 million hectares as of now. And that is a challenge,” said Baffoe.

It’s a challenge some world leaders have accepted. National representatives said at the 2015 United Nations Climate Change Conference that they pledge to donate $1 billion per year by 2020 to stabilize forests worldwide.

They say by 2030, they hope to restore about 600 million acres of forests to aid in stabilizing rising global temperatures. And some supply chain companies say they will hold the sourcing of agricultural commodities to a higher standard.

A Ghanaian rainforest in Kakum National Park.
Locally, the Youth Icons Ghana has launched the Green Republic Project (GRP), an initiative with a goal to plant roughly 20 million trees across Ghana by 2028. The project aims to solve issues surrounding other environmental issues as well, including galamsey and carbon dioxide emissions.

Background
Deforestation involves converting forests into farms and land for residential, commercial and urbanization use. Globally, deforestation has a multi-pronged effect on environment.

Seventy percent of the world’s plants and animals live in forests , and they’re losing their homes to deforestation, according to the National Geographic. Additionally, deforestation disrupts the water cycle and erodes soil, an important component in sustaining vegetation.

The United Nations' Food and Agriculture Organization (FAO) disclosed in a recent report that an estimated 18 million acres of forest (about the size of Panama) is lost each year to deforestation.