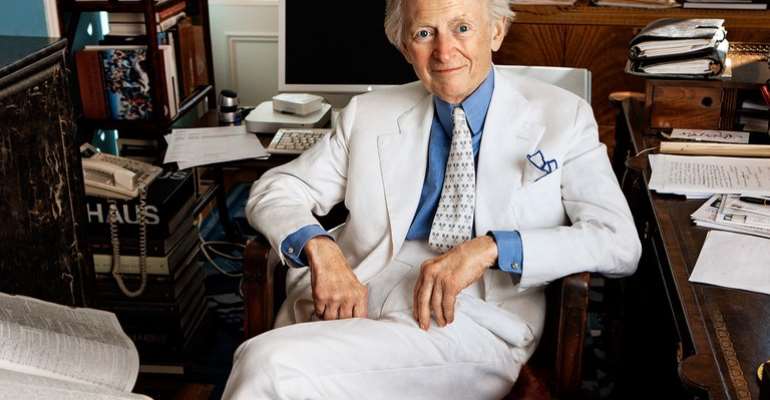 As is the nature of his creepy totality, President Donald Trump has a habit of suffusing the obituaries of the famous and pampered. Tom Wolfe, it is said by such figures as Maggie Haberman in The New York Times, conceived of Trump as a formidable figure before Trump himself came to prominence.

The point is somewhat inaccurate: when The Bonfire of the Vanities made its debut on shelves in 1987, it had to share space with the banal exhortations of The Art of the Deal. “We catch glimpses,” suggests historian and squad leader of empire Niall Ferguson, “of Trump-like figures not in Bonfire but also in the equally engrossing, although less lauded, A Man in Full.”

As New Journalism’s primary advocate, Tom Wolfe headed the field with such experimental forces as Norman Mailer, Truman Capote and Hunter S. Thompson, all dedicated to enriching supposedly factual accounts with excessive flourishes that hurried out the beige in favour of the kaleidoscopic. One source of inspiration for Wolfe was Emil Ludvig’s biography of Napoleon. “It begins,” he recalled to fellow NJ aficionado George Plimpton in The Paris Review, “as the mother sits suckling her babe in a tent.” But formatively speaking, the Soviet grouping known as the Brothers Serapion (Eugene Zamiatin, Boris Pilnyak et al), fusing symbolism with raw historical events, encouraged a change of direction.

In a 1973 anthology of such writings gathered with fellow traveller E. W. Johnson, Wolfe identifies the novel going off in freedom land even as purple-prosed nonfiction was stealing its march. “I must confess that the retrograde state of contemporary fiction has made it far easier to make the main point of this book: that the most important literature being written in America today is in nonfiction, in the form that has been tagged, however ungracefully, the New Journalism.”

The American novelist, by the 1960s, had abandoned that “richest terrain of the novel: namely, society, the social tableau, manners and morals, the whole business of ‘the way we live now’, in Trollope’s phrase.” Such a tendency was in strident defiance of previous writers who wrote novels as social chronicles: Balzac in the context of France; Thackeray on London in the 1840s.

Wolfe’s artillery was also marshalled against old journalism itself, a concerted effort to remove objectivity’s throne and bring colour to description. While the traditional novelist had noted manners and society, the old journalist was still trapped in a refusal to accept the subtleties of the lived life. The newspaper in traditional guise, he claimed, was “very bad for one’s prose style.” Thus spawned the parajournalist, though its ancestry, with its seductive pitfalls, was traced by Dwight Macdonald as far back as Daniel Defoe with his masterful hoax in Journal of the Plague Year.

As Michael Wood would note in a review for The New York Times, the New Journalism extracts the piece of gossip, dreariness or schmaltz, moving it “to the centre of the stage while at the corners, at the edges, vast, scaring implications about American life quietly gesture to us, not really wishing to intrude.” Fact and fiction are no longer dogmatically partitioned, blurring instead into resemblance, which is far from saying that truth is undermined. “What it is suggesting is that fiction is the only shape we can give to facts, that all shapes are fictions.”

His journalism readied weapons as words, tipped with spears of wit and derision. He took aim at dogma in architecture in From Bauhaus to Our House (1981), critical of the “colonial complex” governing the American building that had its origins in Europe as a “compound” of ideologues. He launched missiles at Modern Art in The Painted Word (1975), noting it as a racket that was distinctly non-radical. “The game is completed and the trophies distributed long before the public knows what happened.” Collectors would only ever gravitate to “highly abstract art unless it’s the only game in town” preferring more conservative “realistic art”.

Such writing was bound to miss the mark in some ways or, if it did, embed itself with mixed results. His fabrications could be sloppy, and, unshackled by the rigours of evidence imposed by the investigative journalist, distorting in their speculation. For the sharp Dwight MacDonald, specifically referencing the The Kandy-Kolored Tangerine-Flake Streamline Baby (1965) Wolfe was a good observer who made “no pretence at factuality but sketching with humour and poignancy urban dilemmas one recognizes as real.” In his writing lay a certain “kultur-neuroses common among adult, educated Americans today: a masochistic deference to the Young, who are by definition, new and so in”. This was also accompanied by that “guilt-feeling about class – maybe they don’t deserve their status, maybe they aren’t so cultivated”.

Hip and new, then a studied reactionary, Wolfe’s career was a paradox of idealising pop culture trends and figures while turning on mouldering art and literary movements that had run their course and deserved euthanizing. Doing so gave him a certain eye for barometric readings of contempt straddling those three most American obsessions: money, race and sex. In that, we have Trump, a monster fusion of such interests, having a “real childish side” and adorable megalomania. “The childishness” claimed Wolfe in 2016, “makes him seem honest.” To the last, a chronicler of gossip, schmaltz and those scaring implications.