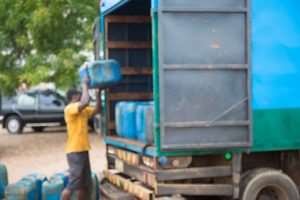 Ghana lost 200 million dollars in both 2016 and 2017 as a result ofthe smuggling of fuel into the country, the National Petroleum Authority has revealed.

According to the head of research at the authority, Shiela Abiemo, up to 300,000 metric tonnes of fuel used in the country are not recorded and no taxes paid on them.

The illegal activity which is done through depots mainly in Tema and Takoradi is one of the major challenges affecting the petroleum sector.

The trend is said to be a syndicate between black marketers and border officials.

Meanwhile the Association of Oil Marketing Companies says the trend is pushing its members out of business as people prefer the smuggled fuel which is cheaper.

The association warns that members will be forced to close down their businesses and lay off workers in the coming days due to declining sales.

“Last year, we had a press conference and blew off the lid on this illegal smuggling and when we did that, we had a lot of support from the government and somewhere in October, we realized it was working until December when it started again,” he stated.

Mr. Dua says until government deals with the problem completely, OMCs can never make enough sales to sustain their operations.

“Government is making attempts to solve the problem but so long as it persist, it becomes difficult to sell our products, he said”

However, the National Petroleum Authority says it is exploring every available means to solve the problem.

In her presentation at the 7th EY Breakfast meeting, Shiela Abiemo said the Authority is ready to prosecute perpetrators of the crime