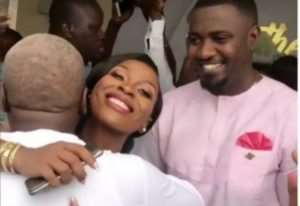 He was among the public figures that witnessed the nuptials of Dumelo and his wife Gifty Mawunya Nkornu at the private wedding ceremony.

John Dumelo was one of the showbiz personalities who declared their support for John Mahama and the National Democratic Congress (NDC) in the 2012 and 2016 general elections.

He has been described by many as the 'beloved son' of the former President.

Others were musicians Edem and Coded of 4×4 fame.

While the two kept their relationship secret, the wedding was not without controversy, especially on social media.

According to reports, John Dumelo had jilted his known girlfriend of 5 years only to get married to Gifty, who he reportedly had been dating for about two years.

Gifty is a graduate of the University of Ghana.
Watch President Mahama at John Dumelo’s wedding below: