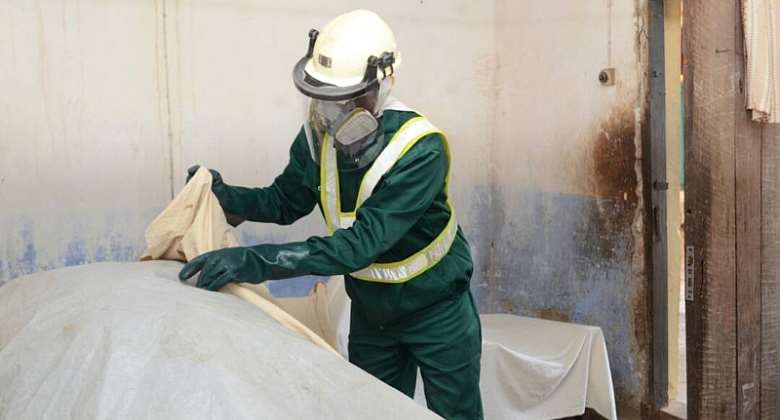 Obuasi, May 8, 2018 - The AngloGold Ashanti Malaria Control Program as part of efforts to increase the effectiveness of its indoor residual spraying (IRS) program has introduced a new insecticide in Obuasi.

The new insecticide, SumiShield 50WG chemical has a new mode of action for Indoor Residual Spraying (IRS) and has tested effective against many mosquitoes that had already developed resistance to one or all of the major classes of insecticides currently available

It is colorless and odorless, has low toxicity, readily dilutes in water, easy to handle and transport as they come in small sachets, SumiShield 50WG is based on the neonicotinoid insecticide clothianidin, which provides excellent control of malaria transmitting mosquitoes, therefore very valuable when used in insecticide resistance management strategies.

It is estimated that about 50,000 households with a population of about 200,000 in Obuasi will benefit from the program, which is being undertaken with donor funding and funds from AngloGold Ashanti Obuasi Mine. The exercise is expected to be replicated in parts of the Upper West Region where the AGAMAL program, which has been running for about 5 years, has achieved remarkable success.

As part of the introduction of SumiShield 50WG, a field trip was organized by AGAMAL and partners to Obuasi.

According to the Program’s Director of AGAMAL, Mr. Samuel Asiedu, the periodic scientific monitoring and evaluation of its programs showed that the mosquito vectors had built resistance to the chemicals they were using and therefore needed a new third generation insecticide with a new active ingredient and new mode of action.

He expressed gratitude to the partners for introducing the new insecticide and for supporting the program to continue with its operations.

The program Manager of the NMCP, Dr. Kezia Malm in her remarks said Ghana was heading for a breakthrough in the management of resistance by embracing this new insecticide SumiShield 50WG from Sumitomo Chemical, Japanese company.

Four communities within Obuasi Municipality, Domeabra, Odumase, Binsere and New Dokyiwa were visited to observe the IRS operations. This gave the participants the true appreciation of IRS in action. House holders, community advocates and spray operators were interviewed. In all the response was positive and local people feel privileged to have IRS in their communities free.

The Queen mother of Odumase, Nana Kwartemaa Adamu was grateful to AGAMAL and the development partners during a courtesy call on the elders of Odumase as part of the community entry procedures. She was very delighted that since the IRS intervention started there has been a drastic decline of maternal mortality to almost zero in her community. She however pleaded for the expansion of the program beyond Obuasi and possibly the entire nation to curtail the import of malaria cases into the community by visitors outside Obuasi.

The AGA Health Foundation was visited to see in action diagnosis and treatment of malaria. In a presentation by the executive director, Mr. Richard Cromwell, he recognized how the AGAMAL IRS intervention has tremendously impacted in the reduction of malaria cases in the health facility.

The reproductive and child health (RCH) unit was visited where the team acknowledged the administration of the intermittent pregnancy treatment (IPT) by health staff to pregnant women who were there for ante natal care. It is commendable that the health facility ensures the malaria prevention dose is taken by the expectant mother at the facility and it is recorded.

AGAMAL has not achieved this alone. It has had close collaboration with the GHS and especially with NMCP. The Program Manager of NMCP, Dr. Kezia Malm who was part of the visit in her remarks commended the mine for its initiative and appealed to the management to help sustain the strides of AGAMAL and help enhance it in the nation’s interest.

The Sustainability Manager of AngloGold Ashanti Ghana (AGA), Nana Ampofo-Bekoe said the company was impressed with the level of impact the program has chalked, becoming the flagship malaria control program of AGA as a company. He said AGA is committed to the sustenance of the Malaria Control program when the team paid a courtesy call on the mining Company.