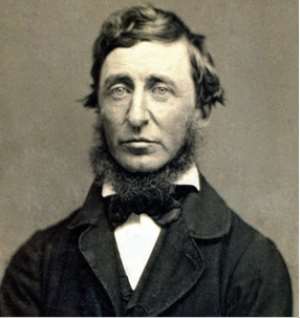 “It’s not what you look at that matters, it’s what you see” (Henry David Thoreau)

Ideally one has to look in order to see.

In other words if one does not look, how then does one truly begin to see to the extent of appreciating what is being seen?

Looking hard enough at focused targets potentially offers an inviting vista of a suite of penetrating insights into the dense forest of hidden truths and unfathomable conundrums in the psychic mysteries of nature.

Thus Thoreau’s keen observation can be said to gesture toward a thoughtful, living organism of philosophic and ideational denseness, arguably a point of departure from the warning signs and potential exegetical symptomatology of parallactic miscalculation in the enterprise of observing phenomena.

Seeing the forest for the trees underlies the infrastructural profundity of Thoreau’s quantum of observational wisdom.

One can also advance the argument that it is by painstakingly delayering the onion that one is certain to arrive at an optimal destination of relative visual and culinary comfort—the latter itself grudgingly dictated to by the stinging odorous physiology and seemingly bulbous physiognomy of the onion—a destination unambiguously circumscribed by a deep philosophical, material appreciation for the well-grounded mystery surrounding the innermost scale of the onion.

What this means is that the meticulous journey of the delayering process itself engulfs a hidden metaphor in the innermost sanctum of the onion—in the form of eye, throat, and nose irritation.

This veiled metaphor may readily translate itself into a latent or overt framology of intimidating encumbrances, certainly a groundswell of challenges one must be willing to overcome in order to establish a willing template of strategic mutuality between theory and praxis—forcefully driven by an asymptotic interface with the temperamental Janus-faced mask of what one might usefully refer to as success.

How one tactically employs the tools of gustatory, olfactory, visual, spatial, and tactile perception in disinterring the culinary mystery or unfathomable secrets of the innermost scale of the onion entails nurturing an unalloyed respect for—or steeled, military dedication to—detail, that is to say an unyielding appreciation and love for the operational signification of the big picture.

Approaching the big picture may boil down to a methodology of analysis or synthesis.

When this methodology is in fact strictly a clinical question of patient-centered care, then the health care professional must surely look close enough to see through the operational fogginess of occupational stress and workplace politics—to the extent that health care professionals can paint the big picture of patient safety, satisfaction and comfort, while simultaneously maintaining professionalism and ethical conduct in the face of workplace frustration, without intrusions of implicit bias in patients’ care plans—in order to appreciate the undercurrent of humanism as an enabling, functional infrastructure of the holistic approach to patient-centered care, to appropriate one of the core ideas of Jean Watson.

The fundamental idea here is that the health care professional is able to understand that human beings exist in a multiverse of mutual respectability, defined by a relational continuum of spiritual and material existence, a philosophic approximation to what Nelson Mandela, late, and Desmond Tutu once referred to as Ubuntu.

In this context human beings see themselves fundamentally as mutual extensions of each other, a notional phenomenology of complementarity that also tends to flow seamlessly into each other—where otherism and essentialism are banished to the dustbin of sociological and existential irrelevance.

To wit, the compounding variables of race, gender, ageism, national origin, class, creed, and ethnicity are prevented from usurping the majestic throne of patient-centered care and evidence-based practice.

I bring this colorful dress of progressive ideas to the clinical practice of patient-centered care.

What do I mean? I vividly recall a situation, when a nurse I was shadowing during one of my relatively recent clinical rotations, immediately abandoned me to my fate when she realized the patient we were to administer a suppository to—together, was half-buried in an ocean of feces.

The nurse in question buried her unabashed nose in the cup of one of her trembling hands, and with the other idle hand rummaging through the deep of her unfocused confusion, she stormed out of the patient’s room mouthing a flatulent volcanicity of muffled curses as she lumbered along her disapproving shadows of immanent turmoil, of emotional implosion.

Apparently the unwelcoming stench of the diarrheic ocean had forced her into a tight claustrophobic corner of professional nonchalance, with clinical concern for the patient’s hygienic wellbeing parting ways with her guilt-smitten conscience.

To make matters worse, the Certified Nursing Assistant (CNA) assigned to this patient was nowhere to be found.

Thus the final responsibility of tidying up and administering the suppository to the patient fell exclusively on my shoulders, as I scouted around for a helping hand and still couldn’t locate one.

I nevertheless executed those tasks with the trembling yet juvenile expertise of clinical precision—somewhat.

Just imagine what unmitigated diarrhea, impaction, and constipation can do to a person’s overall level of consciousness, electrolyte homeostasis, and general health!

What about the dire clinical implications of the pool of feces for the emergence—or recrudescence—of pressure ulcers, about the possible infection or reinfection of the patient’s coccygeal, sacral crater of nosocomial wounds?

I understood among other reasons, that, unlike the warped thinking, condescending attitude and elitist professionalism of the nurse, the patient did not deserve a second baptism of fire in the physiological cesspit of the hygiene hypothesis, so-called, regardless of his bedridden condition.

I also understood that defecation, like the laws of nature—gravity, say, was a natural fact of life.

That defecation held enormous implications for homeostatic stabilization has never been in question.

That defecation constitutes an integral facet of our personalities, that it also contributes significantly to our physiologic behaviors in particular, and to our social behaviors and health generally, and to our humanity—are beyond question.

In a nutshell, defecation underpins our unique identities!

The nurse failed to treat the patient as she would like to be treated by others.

Obviously she looked but failed to see the big picture.

Indeed, the healthcare field and adherence to the patient-centered clinical method are as complex as delayering the onion because it takes sustained practice, patience, foresight, wisdom, imaginative boldness, penetrating insights, and great skills to look in order to see the onion’s innermost secrets which are hidden from the naked eye. Looking therefore takes the operational mechanics of the pineal eye, the third eye, to see beyond the ordinary!

The author has 578 publications published on Modern Ghana.