FBI Investigations: Should it be Dapaah? 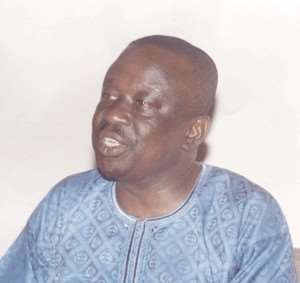 Dapaah "stutters" on Congressman's visit to Ghana Communications minister, Albert Kan Dapaah explains to a local radio station -JoyFM - a business meeting he had with the vice president and a US congressman, William Jefferson who is being investigated by the FBI.

Aide to the vice president, Mohammed Awal, told JoyFM, Alhaji Aliu Mahama is outraged by attempts to link him to an investigation over the congressman's financing of a high-tech business.

According to Mr. Awal the meeting was to enable the congressman to demonstrate how the new ICT technology he wanted to introduce to Ghana would work.

But Mr Kan Dapaah who was also present at that meeting could not readily provide exact details of the exact ICT business plan the congressman had introduced to the government.

The minister who said he was away in Kumasi promised to provide details of the meeting after congressman's entourage when he arrives in Accra.

Newspaper reports in the US say Federal Investigators are interested in Mr Jefferson's links with Ghana's vice-president Aliu Mahama and his Nigerian counterpart Atiku Abubakar.

This is an excerpt of the interview communications minister, Albert Kan Dapaah had with Komla. Komla: Can U tell us whether it is true, first of all whether Rep. Jefferson ever visited Ghana. What was the nature of his visit? Minister: Well, Komla I am in Kumasi at present I heard about this over the weekend while I was in Kumasi and in fact it was one of your reporters who gave me the details. I can confirm that the congressman did have a meeting with me. I would prefer that I come back to Accra and look at my notes before I can give any further information on the meeting. Komla: Well sparing us the details, which you will need to check your notes from, can you tell us generally what this Congressman Jefferson was In Ghana for? Minister: To tell you the truth I don't quite remember the exact details but I think it was in connection with a project that he was sponsoring to Ghana. In fact I cannot even tell you the exact nature of the business he was trying to sponsor. But he did come and make some demonstrations to us. It was difficult to…

Komla: You can't remember what he demonstrated to you?

Minister: It was to do with errr the provision of an Internet services in Ghana errr that much I remember but I will need to refer to my notes to remember the exact things that he wanted to do.

Komla: Okay so did you take his presentation seriously, did you move or was there anything you were required to do to represent the interest of Ghana perhaps?

Komla: So without referring to your notes you can tell us that they were interested in providing us with some kind of Internet services or something like that

Komla: Why will they come to you perhaps because one would assume that anyone who would want to set up an internet service would have to go to either the NCA or partner with GT, why would they come to you sir? Minister: Most people who would want to set up businesses in the communication industry would first want to know about the communication industry in Ghana and they will normally want talk to the ministry, this is not unusual at all. Komla: Okay so after this presentation did you hear from your technical people again? Minister: I, I, I will have to refer to my notes to see what happened, I have rather a vague idea as to what happened at this point in time.

Komla: So do you mean to say that there's been no progress since that presentation?

Minister: Not as far as I know of, but again I need to check with my officers whether they have made some direct contacts without them telling men.

Komla: Okay very well at any point did you take Representative or Congressman Jefferson to see our Vice President?

Minister: Err, well, Can I come back to Accra so I can comment on some of these issues.

Komla: err Hon Kan Dapaah it's a very simple question, did you take him to see the vice president or not?

Minister: I, I did not take him to see the vice president. I was invited to the office of the Vice President, err and we did meet Jefferson.

Komla: You were invited by whom sir?

Minister: Mr Jefferson was err Komla you are going too far into this now. I think it is best if I come to Accra so I can refer…. Mr Jefferson was supposed to see me; he did book an appointment with his team, I waited for some time, he did not turn up at around…

Komla: This is before the presentation to you?

Minister: No before the presentation, the presentation in fact that I saw err was after all this. We all had a meeting with the vice president. The meeting had to be with Jefferson and his group.

Komla: So who initiated the meeting, was it the vice president that invited you to a meeting with Mr Jefferson or you took Mr Jefferson to see the vice President, which one?

Minister: well again I need to check up, look with my executive secretary to see what happened.

Komla: Oh Honorable this is something that is pretty clear and simple either you went with the gentlemen or the gentleman was there when you got there, which scenario is correct. Did you take….

Minister: No, no, no Komla hold on I thought I explained that, Jefferson and his group were supposed to have a meeting with me in my office. I waited and waited and they did not come. Therefore I had to go to the vice president's office because I had been called there for a meeting. I didn't know what that meeting was supposed to be. When I went there I was told that a group of investors were coming to meet with the vice president and it was in my sector and they want me to sit in.

Komla: And you discovered that when you got to the vice president's office?

Minister: At all it is very, very regular, he must have talked to the secretary to call my secretary to tell me to come for a meeting; I suppose that was what happened and of course you will respond to call by the vice president.

Komla: Very good so at this meeting is that where you first saw the presentation from Mr Jefferson and his group?

Komla: Very well just one last question, was the vice president present at this meeting?

Minister: Komla I said err I have given you all that I think I should, err give at this point.

Komla: Its just one question, was the vice president present at this meeting?

Minister: Well if you say it's the last question err I did say that I was invited to take part in a meeting. It was between Mr Jefferson and the Vice president so yes the vice president was there.

Komla: Mr Kan Dapaah we will be waiting for you in Accra sir