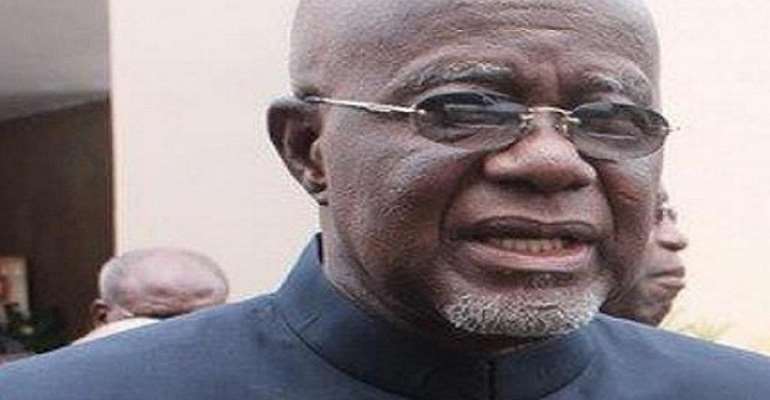 Mr. Hackman Owusu-Agyeman, Executive Board Chairman of Ghana Cocoa Board has said the agitation by Workers to get him removed from office is borne out of some transformation agenda he intends to bring into the Cocoa Industry.

Mr. Owusu-Agyeman, who was speaking to Citi News few days after the May Day Celebration in Kumasi claims, the workers who are calling for his immediate removal are not in favour of his so-called “Transformational Agenda” due to their unwillingness to repent.

During the May Day celebration in Kumasi, some agitated workers of the cocoa industry carried placards calling for the president of the Land, His Excellency Nana Akufo-Addo to show the Board Chairman the exit with some suggesting he has overstepped his bounds by trying to usurp the powers of the rather calm Chief Executive Office, Hon. Joseph Boahen Aidoo.

However, the board chairman appears not to have been moved by the workers stance. According to Mr. Owusu-Agyeman, “this is part of an entrenched position by the people who have worked with COCOBOD, and I think COCOBOD is in crisis.”

He claims there is a “debt overhung of GH₵ 1.9 Billion, and whenever a business goes into such a level of crisis, it either folds up or it cuts down the staff strength dramatically so it can survive.”

The Board Chairman opines that there was a suggestion from government to cut down workers number by 12,000, something the board has vehemently declined, saying “but we are not cutting anybody” and that he is asking workers to be more efficient.

He further asserts the reason workers of the industry are asking for his head is because of their SO-CALLED ESB he has failed to sign. “The latest issue before I left was the fact that they have asked me to sign GH₵ 160 Million for them from their “so-called ESB” (End of Service Benefit). He however, outlines three reasons for his failure to release to workers their own contribution, the ESB. a) He does not have any clue of the so-called ESB; b) workers didn’t give him any background; and c) the ESB is not anything that could be done (withdrawn) without recourse to informed opinion, especially from lawyers.

Meanwhile, some workers after listening to the interview on citi news have vowed that they would do whatever necessary to get him out of the cocoa industry, saying if the president and his government want to remain in power 2020 and beyond, he should kick out Mr. Hackman Owusu-Agyeman or better forget 2020.

The angry workers say the ESB belongs to them, and for well over 3 years their salaries have not been hiked; thus, they see no reason why the Board Chairman is becoming a stumbling block. “We started this ESB contribution way back about 8 – 10years ago, it is our own contribution. We therefore do not understand why he wants to stop us from taking what is rightfully ours. Besides, the economy is eating us up. So, what is the board chairman talking about?” A worker bemoans.

Last month, some farmers in some cocoa growing areas also demanded that, Mr. Owusu-Agyeman, be sacked from his position, saying he was clueless about events in the cocoa industry. The group, Concerned Farmers Association of Ghana, mentioned in particular, how farmers in the Eastern and Western regions, were being intimidated with the help of the Police to forgo their cocoa farms for meager compensation from the rubber plantation companies.

The President of the Association, Nana Oboadie Opambour Boateng Bonsu II, said an urgent plea to the Board Chairman of the COCOBOD, Hackman Owusu-Agyeman, to do something about the dire situation, did not yield any fruit; the group was rather rebuffed.

Cocoa plays an important role in the economy of Ghana. The cocoa industry currently employs approximately 800,000 farm families spread over six of the ten regions of Ghana. 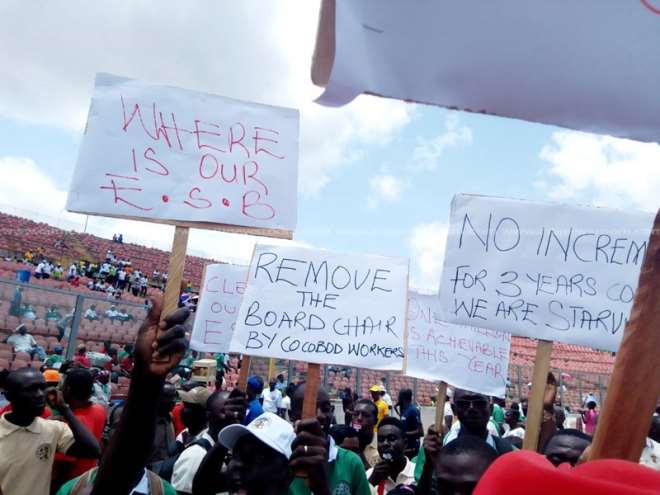