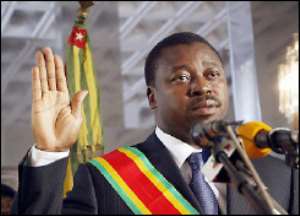 FAURE GNASSINGBE ALREADY HAS 8 WIVES AND 11 KIDS Worried members of President John Agyekum Kufuor's family are beginning to wonder about the wisdom in agreeing to the betrothal of the President's daughter, Nana Ama Kufuor, to Togolese President, Faure Gnassingbe Eyadema, the 38-year old son of the late Togolese dictator, General Gnassingbe Eyadema, according to Ghana Palaver sources within the Kufuor family.

This follows the discovery that Faure Gnassingbe is already married to eight women and has 11 children by them. If Nana Ama Kufuor's betrothal to him gets converted into a marriage, which is most likely since she is carrying Faure's 12th child, it means that Nana Ama Kufuor will become Faure Gnassingbe's 9th wife. The worried Kufuor family members are of the view that this is not very dignified for the daughter of an Ashanti royal and President of the Republic of Ghana but alas, it seems as if the deed is done.

Meanwhile, Ghana Palaver has learnt that President Kufuor was closeted with his close media and Public Relations advisers the whole of last week strategizing as to how to deal with the Ghana Palaver expose of this latest scandal to hit the Kufuor family. An outright denial has been ruled out of the question because the story is true.

Using the NPP strategy of ignoring the story as they do to all Ghana Palaver stories is considered inadvisable because once Nana Ama Kufuor delivers her baby, they will be forced to disclose who the father is. The third option, to acknowledge that fact that Nana Ama Kufuor is expecting Faure Gnassingbe Eyadema's baby and that the two are engaged to each other, was considered the best option.

How to do that without giving credence to the Ghana Palaver story is the dilemma that President Kufuor and his media advisers are grappling with. Whatever option is exercised, however, the fact remains that this is one more addition to the "shame and scandal in the family" - President Kufuor's family.