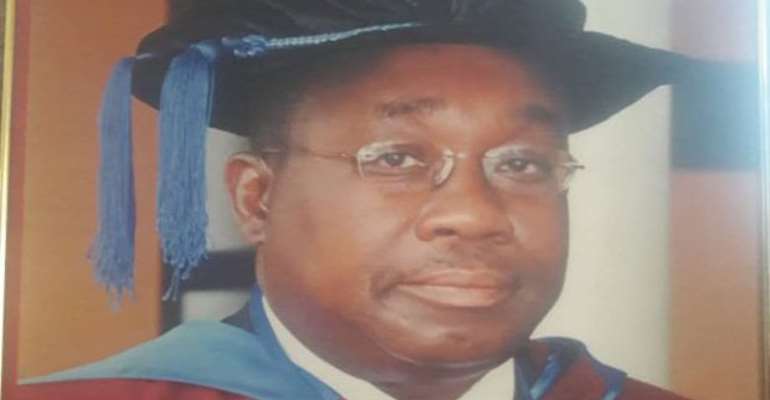 Dr. Samuel Joseph Anie Jnr. was born on Wednesday, 10thOctober 1956 in Cape Coast, in the Central Region of Ghana.

His father, the late Samuel Joseph Anie was a textile manufacturer and the founder and owner of Anitex Limited in Accra. His mother, Mrs. Josephine Anie is a pharmacist.Samuel was the first born to the mother.

Samuel began kindergarten at the Ghana International School (GIS), CantonmentsAccra in 1959 when he was 3 years old. He went on to primary school at GIS, reaching Class 7 in mid-1968. Throughout his time at GIS, he was noted for his pleasant, hard-working character, and he won many prizes. He was particularly noted for his ability to master both Arts and Sciencesubjectsequally. He enjoyed sports and all other school activities – his favourite sport being soccer.

In 1968, Samuel passed his Common Entrance examination with flying colours. He was accepted at Achimota Secondary School. He was at Achimota School from Form 1 until he took his O-levels in 1973. Here again, Samuel took part in the full range of school activities, including athletics and soccer. He was noted for his pleasant and likeable personality. He made very good friends with juniors and seniors alike.

Samuel will be particularly remembered by those who were in Livingstone House and Cadbury House. Many old Achimotans will remember him as the original and first “Chester”, in a series of Chesters who adopted the same nickname when they followed suit by attending Achimota Secondary School after him (2 younger brothers).

Samuel successfully completed his O-levels and went on to sixth form at the Aggrey Memorial Secondary School, Cape Coast, Ghana. He completed his A-levels in 1975 and then proceeded to attend Medical School at Bucharest University, Romania. In 1982, he obtained his MD degree (Doctor of Medicine)

He returned to Bucharest Romania in 1985 to specialise in Cardiology, and then went to the Royal Free Hospital, London where he specialised in Gastroenterology.

In 1990, Samuel left for South Africa, and successfully completed a 2 year medical Registrar programme at the King Edward VIII Hospital, Durban, through which he gained Physician Specialist status.

Samuel was devoted to Medicine, and cared for his patients. He always took the time to understand his patients in a holistic manner. No medical problem was too trivial for him to listen to – no condition was so complex that he would not take the time to explain it in simple terms to his patients. Whether treating presidents, prime ministers, senior state officials or all others who required his undivided attention, it is often said that Samuel was always observing and diagnosing – sometimes even before his patients told him about their medical problems. Samuel was our family doctor – and the entire family, friends and acquaintances in Ghana, South Africa and worldwide can attest to his support in explaining treatment options for every medical condition under the sun.

Over the past few years Samuel had battled with illness. He passed away peacefully on the 5th of April 2018.

Samuel will be sorely missed by his mother and all his siblings.

He leaves behind his wife Betty and 4 daughters; Josephine, Samantha, Charlotte and Kimberly.Josephine is a qualified mechanical Engineer. Samantha is a 4th year medical student at the University of Cape Town. His third daughter Charlotte graduatedin Building Construction Engineering this year. His last daughter Kimberley has just started her first year in Accounting Sciences at Wits University, Johannesburg. He was a devoted father who loved his children dearly.

The entire family will draw strength and good example, from his loving, unifying, humorous and respectful nature.Everyone who ever met him, will retain fond memories of Samuel. He lived a full life which does perfect justiceto the following verse in the good book:

Psalm 90 Verse 12 – “So teach us to number our days, that we may apply our hearts unto wisdom.”