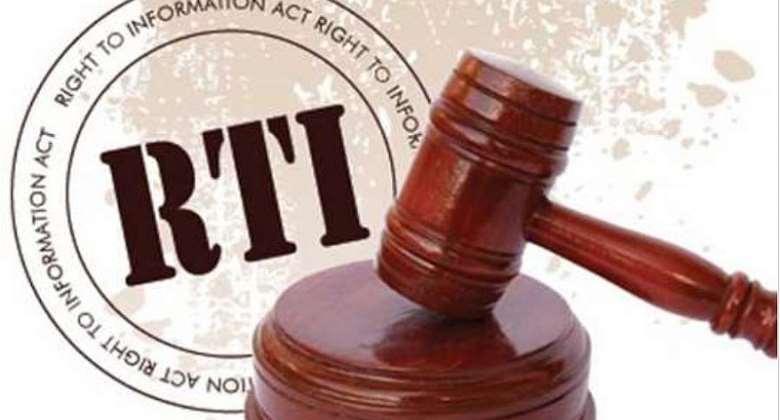 On Wednesday May 3, all roads and airspace lead to Ghana as journalists all over the world congregate in Accra to celebrate World Press Freedom Day. To host such an auspicious event is indeed a pat on the back for the significant progress we as a country and people have made in liberalizing and empowering the media.

But, the occasion compels us to reflect on the unusual blot to our free media and democratic credentials in terms of the 17-year delay in passing a Right to Information (RTI) law. After several broken promises to pass an RTI bill, the bill has now been gazetted and will be laid before Parliament soon with the strong expectation that it will be passed before the year is out.

The RTI law comes in to provide the official framework to facilitate citizens' requests and access to information, the scope for the minimum exemptions to information disclosure, and the right to appeal the application of such exemptions. Though citizens generally support an RTI law there are many people with limited knowledge about the RTI and unsure about its potential benefits to them. If an RTI regime is to succeed in Ghana then it is imperative that those leading the advocacy for the passage of the RTI bill, increase their efforts to educate, dispel myths and misinformation and equip citizens and decision makers with the knowledge to support the development of a well-functioning access to information regime in Ghana.

Benefits of the RTI Law
In 2017, the Auditor General, Mr. Domelevo released an audit report on the 2016 Liabilities of Ministries, Departments and Agencies (MDAs). The Auditor General following the audit rejected 46% of the total claims in the amount of 5.47billion Ghana Cedis ($1.2bn) more the $915m IMF package Ghana is currently accessing. The reasons for the disallowance, includes absence of relevant documents such as warrants, contracts documents, invoices and procurement records.

The report also cited poor maintenance and double payment of claims. In essence, if the Auditor General was not diligent, these huge sums of money would be owed by the State and the government would have used the scarce resources from taxpayers to settle fictitious debts. The issue of records keeping in the public service is a major problem that needs to be fixed. This is where the RTI would be most valuable.

Clauses 3 and 4 of the current RTI Bill 2018 obligates public institutions to compile and publish a manual on information they generate for access by the public. Not only does this ensure that proper records are kept, it will help improve the information management system of public institutions and bring it into the modern world.

The media will also benefit immensely from the RTI law. For many investigative journalists who often have to use subterfuge to access information that ordinarily should be for public consumption, a framework for accessing information ensures that clear lines for the rules of engagement will be drawn to allow for easy access for journalists to do their work in fighting corruption, holding leaders to account and promoting development in the country.

It is one of the reasons why Clause 2 of the RTI Bill 2018, obligates public institutions to voluntarily make information accessible without application from individuals. There are many other benefits in respect to managing public health like during an outbreak of contagious diseases, dealing with false news through social media and just day-to-day information about public service delivery to reduce facilitation payments.

RTI Law: Why the fear
Despite the obvious benefits of the RTI law, it has been 17 years with one broken promise after the other. One of the reasons for the delay in the passage of the RTI law is a fear held by the political class that this would give citizens, media and opponents unfettered access to misuse information, a fear that is unwarranted.

An RTI framework is exactly the kind of institutional arrangement that ensures that a human right is not abused. In fact, a significant portion of the Bill is dedicated to the types of information exempted in the public interest subject to a harms test, i.e. that the benefits of disclosure outweigh the harm it will cause.

Certainly, we feel some of the exemption should be made narrower still before it is even subjected to a harms test. Overall, however, most of these exemptions are consistent with good practices elsewhere. Moreover, the political class should remember that they are in office to serve the interest of the citizens who elected them and on whose behalf they are appointed to serve. They must also remember that they are citizens first and they would also need information when they finish their assignment. At the end, any citizen that stands against access to public information has something to hide and should not be countenanced.

Firstly, implementation of the RTI law can only be sustained where there is political will. This should be supported by public awareness creation and capacity building so that the RTI law does not join the unenviable ranks of impotent laws in Ghana.

Implementation should also involve oversight and monitoring groups to whip up momentum for the working of the law and provide unbiased mechanisms for issues of compliance to ensure proper balance in the system like in the case of Mexico. Ghanaian citizens could particularly form groups and coalitions to monitor delivery of services and government policies, as achieved in Kenya, UK and India.

Proactivity in disclosing information should also cover issues such as quality, access and utilization.

Conclusion
Without an RTI law, citizens cannot fully enjoy their inalienable rights to development and the optimum provision of services. Corruption will continue to be rife, resulting in a situation where only the elites in society can survive and thrive.

After 17 years of toying with the idea of whether to pass or not to pass the RTI law, the time has come. Indeed, the time is now! Not the next election year or in another 16 years. When countries like Burkina Faso, Liberia and Cote d'Ivoire, besieged by political turmoil, instability and unrest has found the courage to pass RTI laws, Ghana literally has no valid excuse. Let us once again, show courage and leadership.

#PassTheRTIBillNow
–
By the RTI ACTION CAMPAIGN

'We will stand united to oppose e-levy' – Haruna Iddrisu but...
33 minutes ago