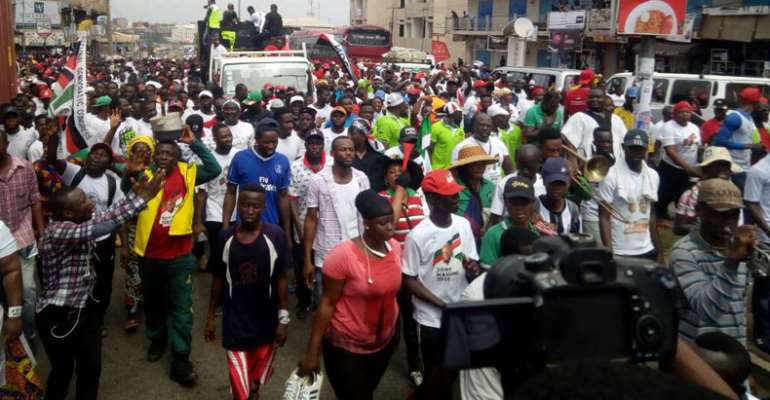 A section of the crowd at the event

Former President John Dramani Mahama has pinned his hopes on God to choose a leader for the National Democratic Congress (NDC) to capture power from the ruling New Patriotic Party (NPP).

According to him, the party has several competent people that can lead the party into the 2020 general elections.

He stated that God, the creator of the world, would help the largest opposition political party in the country to select the suitable person.

Interestingly, Mr Mahama did not announce his bid for the flagbearership position.

“The NDC has qualified people to become our presidential candidates for the next presidential elections,” Mr Mahama told a sizeable number of NDC members and supporters at Asawase in Kumasi on Saturday.

Some political pundits and members of the NDC have accused Mr. Mahama of hiding behind the Unity Walk to market himself to the party people to boost his chances of winning the position.

“God will pick our next presidential candidate and hopefully that person will lead the NDC to win the next election and form the next government to steer the affairs of our country,” he stated.

He made the disclosure during a mammoth rally at Asawase in the Asokore Mampong Municipality to climax the Unity Walk organized in the Ashanti Region on Saturday by the largest opposition political party.

Mr Mahama stated that the NDC is poised to capture political power from the ruling New Patriotic Party (NPP) in 2020, adding that the party is now in a crucial stage of re-organization after suffering defeat in the 2016 polls.

According to him, the NDC would train members at the branch level to police the party's ballot boxes during the next presidential and parliamentary elections.

The former president did not state whether the NDC lost the 2016 polls through rigging, but emphasized the need for the party to prepare adequately for the 2020 elections, which are very crucial to the NDC.